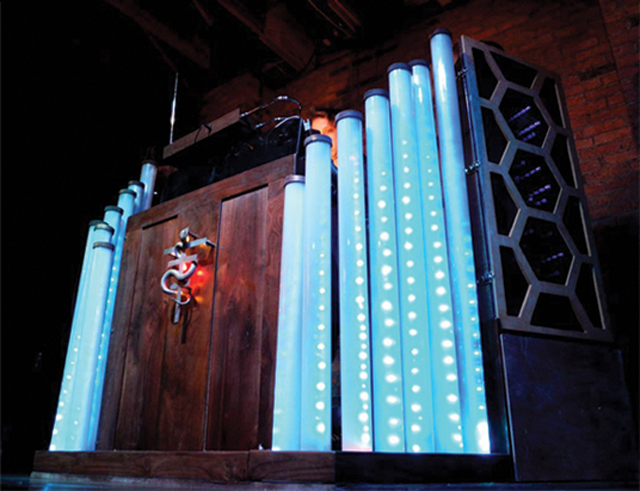 The PsybOrg, above, is the custom live performance rig of composer/producer Logos (Jim ‘Andor’ Genaro). Genaro wanted to create a rig that went beyond basic function to create an exciting environment for his performances.

The PsybOrg is Inspired by the form and functionality of a pipe organ. It incorporates analog synthesizers, digital controllers, a Theremin, and sound reactive light displays in a walnut housing.

Here’s an introduction to the PsybOrg:

This second video features a technical demonstration of the PsybOrg:

The PsybOrg was designed by Logos and crafted by a team of builders, programmers, and mad scientists. Luthier John Mulholland built the wooden housing with help from Phill Huber, and multimedia artist Joel Horne designed the PsybOrg’s visual components.

Logos took the PsybOrg on its maiden voyage during his summer 2012 tour, culminating in a performance at Sacred Spaces Village at the Burning Man festival in Black Rock City, NV. He has also showcased it at events with the Bob Moog Foundation, an organization devoted to creating interactive educational experiences that introduce children and adults to the science of sound.

You can find out more about Genaro and his music at the Logos site.