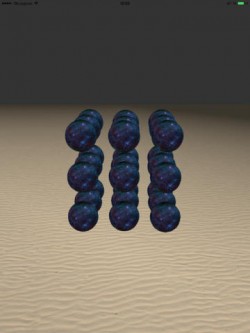 The app provides a new 3D interface for controlling patches on the Blofeld.

Here’s what he has to say about MidiBlob:

MidiBlob is a plug and play performance oriented multi touch controller for your Blofeld synthesizer.

By manipulating a 3D scene (the Blob) with a set of very intuitive interaction MidiBlob can modify and control your synth sound to a depth that cannot be reached with traditional controllers.

Filters, envelopes, modulations, wave characteristics are under direct control of your fingers, the iPad become an extension of your instrument. No configuration needed.

Here are a couple of video demos of MidiBlog in action:

This video is a demo of the MidiBlob for the Blofeld App on a arpeggiator-based Blofeld patch. The right hand plays the keyboard, not visible in the video, while the left hand uses MidiBlob on the iPad to ‘play’ the sound.

In the second video, below, the MidiBlob is used to interactively transform a lead sound, being played on a traditional keyboard:

MidiBlob works with any Core MIDI compatible interface or with a network based Core MIDI connection, and it is an iPad application. It runs on iOs 6.x and 7.x.

MidiBlob is available in the App Store for US $4.99.

If you’ve used MidiBlob, let us know what you think of it!