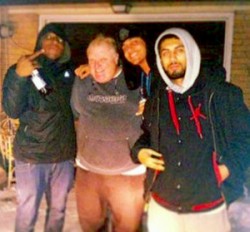 The Toronto Star reports that city-owned buildings at Exhibition Place will no longer host electronic dance music parties, as a result of a 4-3 board vote on Friday. Advocates of the ban argue that it will make young people safer, saying that ‘drug and alcohol abuse among minors is rampant at electronic dance music (EDM) events’.

Councillor Giorgio Mammoliti, who introduced the motion, said the use of MDMA and ecstasy is of particular concern, arguing “this is not what city property and taxpayers’ money should be use for.”

Opponents argued that the ban was bad for business, would drive dance music fans to unregulated underground events, and was driven by the friendship of notorious ‘crack-smoking mayor’ Rob Ford, above right, and Zlatko Starkovski, owner of the local Muzik nightclub.

Councillor Mike Layton, who voted against the measure, said “They’ve used this very emotional argument to improve the financial position of one particular bar owner – that happens to be the bar of choice of the mayor.”

Mayor Ford is not against electronic dance music across the board. Earlier this year, he was filmed ‘beat making’ with Ableton Live:

The Toronto ‘Footloose ban’ seems likely to be fresh fodder for comedians, who’ve had a heyday with the city since news emerged of Mayor Ford’s crack smoking, his initial denial and later admission.

Is there a better way for cities like Toronto to deal with drug use at music events? Leave a comment and let us know what you think!