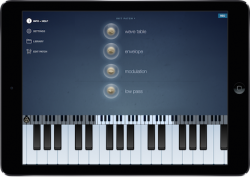 Here’s what they have to say about Mitosynth:

Mitosynth combines several techniques. At the heart of the engine, you can load up to 32 waveforms into a single patch; at any given moment, it picks some out to be combined, modulated, then passed through a subtractive-style programmable filter/FX chain.

As well as importing or sampling audio, or using the built-in waveforms, you can also feed the wavetable engine from Mitosynth’s additive synthesiser, or by using the prefilter to process existing waves.

And to keep your sound in motion you can rig up complex LFOs, envelopes or other signals to drive your synth patches. Without a single patch cable.

Here’s an audio preview of the output of Mitosynth:

Here’s what they have to say about this audio demo:

This is a recording of some experimental/demo patches from an early alpha of the app. Some things to be aware of:

• All I’m doing here is picking patches and playing/holding some notes. I’m not using the XY pads, a mod wheel, or anything like that. All the motion you hear is part of the patches themselves.

• Mitosynth supports sampling and importing waves, but I’m not using any sampled/recorded/imported audio here at all. Every patch you hear uses only waveforms wholly synthesised within the app.

• When I have time to run around with a mic making field recordings to use as the basis of new patches, then you’ll hear what Mitosynth can do when it doesn’t have one hand tied behind its back 🙂

• These are all just experiments and the app isn’t even in beta yet, so remember things can still change.

Note that this is a demo of a pre-release version of Mitosynth. Official details and release date are to be announced.