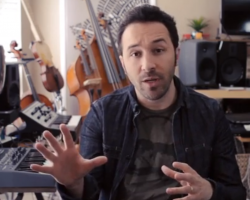 Stocco is known for going to extremes to create inspirational sounds (setting pianos on fire, making music with bonsai trees), so we talked with him to learn more about the new impulse response library.

Synthtopia: What can you tell us about Rhythmic Convolutions?

Diego Stocco: This is a set of 200 Impulse Responses, specifically designed for the processing of rhythmic elements and instruments like drum machines, real drums and percussion, beat boxing and in general, instruments that have a percussive quality.

I made the Impulse Respones from organic-sounding sources and materials like metal, glass, paper, rubber, wood, water, etc.

Synthtopia: For readers who haven’t tried it out yet, what is convolution processing?

Diego Stocco: In the context of working with sounds, convolution processing mathematically combines two sounds together, resulting in a processed sound that contains spectral and temporal properties of those two initial sounds.

If you listen to an Impulse Response of a reverberated space, you’ll hear that it sounds like a burst of noise, starting with a crisp attack followed by a tail that becomes muffled until it finally disappears. That specific burst of noise is recorded as an audio file, and the convolution math is done by the plugin in real-time.

Since Impulse Responses are ultimately audio files, they can be a recording of many other things besides bursts of noise.

Instead of creating reverbs, my set of impulse responses allow you to transform a dry sound as it would pass through different materials, like glass, stones, wood, water, paper, and so on, and add a certain movement to it as well. This movement can be fluid like water or granular like sugar, it can be sharp as a metal impact or sustained like two stones being rubbed against each other.

Here’s a video introduction to the library:

First, the impulse responses have been created specifically for the processing of rhythmic material. Second, they have been recorded and organized into themes, allowing the user to quickly identify what they are. And third, the impulse responses have been designed so that they can be combined together to create hybrid materials. Some of them work great in the hi-end, others in the mid or low-end; some are rhythmically simple, others more complex.

Synthtopia: Can you give us a little background on your process for creating this collection? 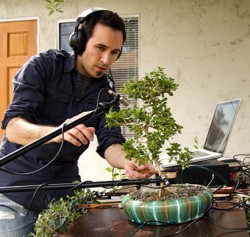 Diego Stocco: As you can see in my previous works, organic sounds and custom-built instruments are a big source of inspiration for me.

I’ve been thinking about the concept of making something sound like it’s passing through sand, through water or a even through a brick for a very long time. At first I was considering physical modeling, but then I realized that I could get some interesting results with convolution processing. I did several recording sessions, and started piling up hundreds of possible ideas, then I tested and refined them until I came up with the final selection.

Diego Stocco: There’s a certain amount of experimentation and optimization that went into creating this set, convolution processing is a bit of guess, you might think that a certain Impulse Response will translate in a certain way, but then it might result in a mushy sound with extreme resonant peaks. The low-end is usually problematic.

When I designed these Impulse Responses I knew that I wanted them to work primarily on rhythmic material, so I made a certain type of recording and editing choices to make that happen.

Synthtopia: What are the requirements for people wanting to use Rhythmic Convolutions?

Diego Stocoo: These days there are many choices for convolution plugins and the majority of them allow the user to import external Impulse Responses, my Impulse Responses are presented as .wav files so they can compatible with many plugins.

Synthtopia: This is a huge collection – do you have any recommendations for users getting started with it?

Diego Stocoo: The video demo I created shows how I would use them. I like to interact with them in a musical way, not just as static effects.

In general, it’s a good idea to start with a simple beat and listen to what happens to it. Try various rhythmic sources and instruments. Even a rhythmic synth line could be transformed in a interesting way.

Rythmic Convolutions is a set of 200 impulse response that work with any convolution plugin that .wav files.

They are organized into 10 sonic themes, that can also be mixed together to create hybrid sounding results:

Rhythmic Convolutions is available for $29.99 on Gumroad (credit card only), or with PayPal. Additional information, including licensing details, is available at Stocco’s site.