According to the company, Arpology is the world’s first virtual instument dedicated entirely to arpeggiated/sequenced instruments.

Sample Logic describes Arpology as employing “an entirely new approach” to step sequencing. The core of Arpology has been designed around Sample Logic’s new, powerful “Step Animator” – a step sequencer and arpeggiator combined into a single engine for animating complex melodic and rhythmic patterns on a per step basis, thus eliminating the limitations of traditional sequencing.

Arpology is powered by Kontakt Player, and includes over 550 instruments and multis spanning a broad range of musical genres. It also comes preloaded with over 150 step animator preset patterns to enable the user to change the sound of any loaded instrument in real-time. 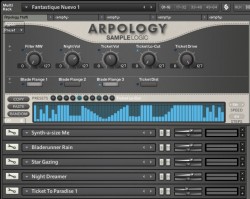 Step Animator. The Step Animator, the driving force behind ARPOLOGY, works as a complex “sonic animation tool.” Developed from the ground up, the Step Animator engine animates sound over time, with its dynamic controls strategically arranged to maximize power and creative control in an efficient interface. This kind of control provides the flexibility to quickly sequence complex rhythmic and melodic patterns. The Step Animator also produces what Sample Logic describes as “insanely creative” sounds, all at the MIDI level. 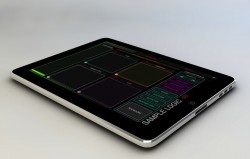 Control via tablet. In addition, Arpology is the first Sample Logic product to come bundled with a fully-integrated, custom-designed control surface interface (built-in TouchOSC) for tablets. The tablet interface provides easy-to-use controls that extend user control beyond what is available in Kontakt. For example, the controller comes with 4 “X/Y” sliders to enable to user to warp the sounds of any instrument in real-time. This app also provides simultaneous multiple knob manipulations of the ARPOLOGY interface.

Instruments and Multis. In ARPOLOGY, Sample Logic has included a wide range of instrument recordings spanning all genres and sound types from choirs, woodwinds and brass, to sound effects, field recordings and industrial tools. Sample material was hand-picked from the Sample Logic vault, then “morphed and animated” into never-before-heard instruments. The instruments are divided into 3 main categories: Cinematic / Organic, Electronic / Effectual, and Percussive. Furthermore, Multis are also divided into 2 additional categories: Instrument Stacks, and “One Note Glory.” An in-depth look at “Multis in Action” is at the bottom of the article.

Here’s an in-depth look at Arpology:

Pricing and Availability. Sample Logic’s Arpology will be available begining May 27, 2014, for $399.99. Customers can buy Arpology with a pre-release discount, for $299.99, if ordered before May 27. To pre-order, and for more information, including system requirements, visit the Sample Logic website.