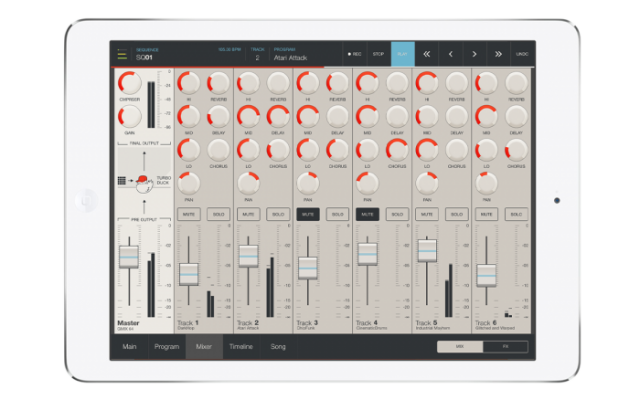 In addition, they’ve released a new demo video, in collaboration with developer Retronyms, that demonstrates using hardware pad controllers with the app. 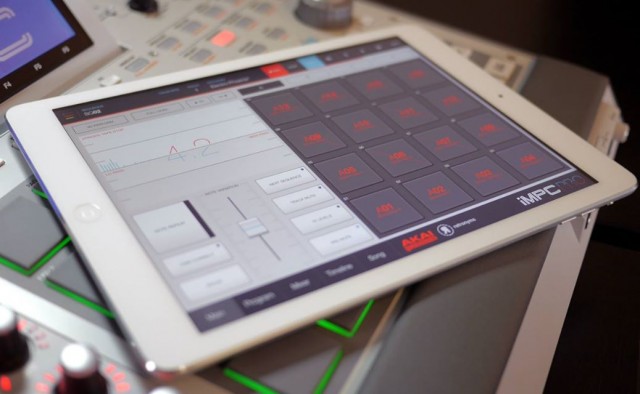 iMPC Pro offers 64 tracks, each with 4 pad banks of 16 pads. Each of the 64 tracks has a dedicated, automatable mixer channel that features a gain fader, 3-band EQ, pan, and four effect sends. Plus, a Master Channel includes a master fader and in-line master compressor threshold and gain.

In addition, a resampling feature records audio that comes out of the Master output and places it in your current project as a new sample.

iMPC Pro also comes with a sample editor that supports multi-touch editing with zoom, envelopes, gain controls, and more. Slice mode automatically splits your sounds along a time-divided grid, making it easy to chop up samples into one-shots or loops. You can then trim and audition the sample prior to committing any of your trim edits.

Additionally, you can process your sound with reverse, normalize, amplify, fade-in, and fade-out effects directly from the sample editor.

The all-new Timeline View opens a multi-touch gestural editor that enables you to sequence, program, record, and edit note events and their parameters all on one screen. The Timeline consists of a grid that can be set to various beat divisions, making it easy to program beats or songs by locking note events to the Timeline.

In addition, you can record directly to the Timeline, and use Time Correct to automatically quantize your playing from a range of 1/8-note to 1/32T settings with variable swing. Each note event has a horizontal line that displays the level of a specific parameter, such as the velocity level, for quickly checking or editing without diving into more menus. You can also select, copy, paste, and cut any number of note events using iOS gestures.

You can edit any of the sounds, re-sample them, and add them to your own bank of custom sounds.

iMPC Pro also supports .WAV and .AIFF files, so you can import, edit, and produce with your own sample libraries.

In addition to its production capabilities, iMPC Pro offers a series of performance-driven features.

Flux, an expressive performance control, is an easy way to warp and glitch your beats into something entirely different. With real-time controls, you can drop beats, create glitch effects, and smooth out track transitions during any live performance. Flux also supports automation, so you add the same dynamic intensity to your productions.

The 3D-performance mode, a new addition to iMPC Pro, allows you to map iMPC Pro parameters to your iPad’s accelerometer and manipulate your music by tilting your iPad.

Next Sequence lets you queue and juggle your sequences, allowing you to remix and perform on the fly. And classic MPC functionality, such as MPC Note Repeat and Note Variation, let you control samples expressively.

iMPC Pro comes with an array of onboard effects that include reverbs, delays, bit crushers, limiters and more. The Turbo Duck compression effect fattens up your tracks by mixing in sidechain compression. It can also create a pumping-and-breathing effect. In addition, the Turbo Duck icon animates to the compressor’s dynamics—dipping up and down when the compressed sound “ducks” out—to provide real-time visual feedback of the effect’s intensity.

iMPC Pro’s UI was redesigned for a cleaner look and improved gestural control.

iMPC Pro’s interface is broken down into five tabs – Main, Program, Mixer, Timeline, and Song – that organize the core elements of your music.

iMPC Pro is also outfitted with Precision Knobs, controls that can be tapped and magnified so you can precisely dial in parameter values. Undo History allows you to roll back edits from a list of changes, enabling you to experiment with changes and return to previous states.

iMPC Pro lets you can sample directly from your other music apps.

Inter-app audio allows you to route audio and control data between apps on your device. Use iMPC’s sampler and inter-app audio to record new sounds from compatible apps for use in your programs.

AudioCopy 2.0 makes it easy to paste sounds from compatible apps. Updated for compatibility with iOS 7, AudioCopy 2.0 also includes an updated UI and other improvements. Visit retronyms.com/audiocopy for more information.

With integrated community support, you can produce a track and then upload it directly to SoundCloud, Twitter, Facebook, and Tumblr from your iPad.

The latest video looks at using hardware controllers, like the MPC Element and the MPC Fly, with iMPC Pro:

Akai has also released specifications for iMPC Pro, which address a lot of reader questions about the new app:

Note: iMPC Pro is currently in development, so features are subject to change. Pricing and availability for iMPC Pro are to be announced.

Check out the specs and demo and let us know what you think!