“As synth geeks, we asked ourselves what our dream mono synth would be,” says Smith. “Then we built it.”

Here’s the official intro video for the new Pro 2 synthesizer: 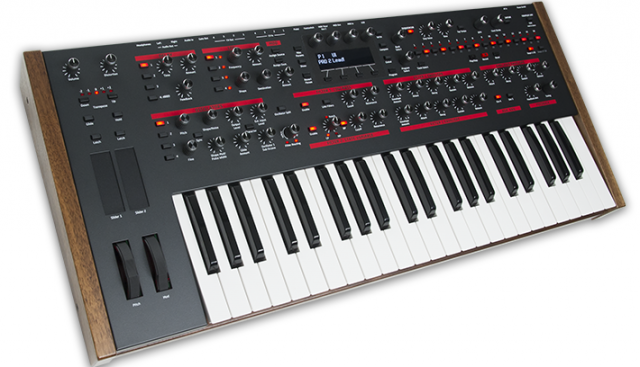 A hybrid instrument, the Pro 2 features four digital oscillators (plus sub-oscillator) with super saw waves and newly-designed, dual analog filters, inspired by classic designs. The filters (one low-pass and one state-variable) can be run in series or parallel, with the state-variable filter providing low-pass, high-pass, and band-pass modes.

Oscillators can be routed in pairs to either filter for a variety of tonal possibilities. “Our new analog filter design gives the Pro 2 a depth and presence that’s immediately recognizable,” says Smith. “It has a sound all its own, distinctly different from our other instruments such as the Prophet 12.”

The full-featured step sequencer operates in 32 x 8, or 16 x 16 mode and allows real-time input. It can sync to external MIDI clock and can also be driven by an external audio input. Sequences can control not only oscillator pitch, but any parameter in the Pro 2’s extensive modulation matrix. It supports both rests and variable-length sequences.

Another notable feature of the Pro 2 is its 4 rear-panel control voltage inputs and outputs, which make it compatible with modular synthesizers. The control voltages can be assigned and routed from within the modulation matrix and can run at audio rates for extreme modulation effects.

“A primary goal was to make the Pro 2 as open-ended and flexible as possible,” says Smith. “The four control voltage ins and outs really open up a world of interfacing possibilities with other gear. You could almost call the Pro 2 our own mini-modular.”

Smith says that the surprises don’t end there:

“A very cool bonus features is that, even though we designed it primarily as a very powerful mono synth, it’s actually 4-voice paraphonic – you can play 4 notes simultaneously, if you want to. Add in the super waves, and you’ve got a very big sound.”

In paraphonic operation, the 4 individual voices share a common filter and envelopes. Paraphony has gained popularity in recent years and was found in such vintage instruments as the ARP 2600 and ARP Odyssey, which were duophonic.

The feature set of the Pro 2 is rounded out with a multimode arpeggiator; 4 stereo, multi-tap delays with analog modeling; 4 LFOs; tuned feedback; analog distortion; Character controls with sound sculpting options such as Drive, Hack, Decimation, Girth, and Air; and extensive modulation possibilities.

The LFOs, delay, and arpeggiator can be synced to either the internal clock or an external MIDI clock. Two programmable position- and pressure-sensitive touch sliders and pitch and mod wheels provide nuanced control over live performance.

“Right now, there’s a trend of reissuing classic synths from the past,” notes Smith.  “People have been asking for a reissue of the old Sequential Pro-One for quite a while. But as a synth designer, I’m happiest creating new instruments – synths that with every iteration put more power and better sounds into the hands of musicians. The Pro 2 is light years beyond the Pro-One in every way. It’s the most powerful mono synth I’ve ever made. You’ve got to keep moving forward.”

The Pro 2 is scheduled to start shipping late July with a street price of $1,999. For more information, see the Pro 2 product page.