The expansion pack features a set of guitar licks and chords, synths, and drum sounds plus new presets for Massive and the Maschine 2 Drum Synths. It runs in the Maschine 2 software on Maschine Studio, Maschine, or Maschine Mikro.

A compact version for iMaschine is also available via the in-app store. 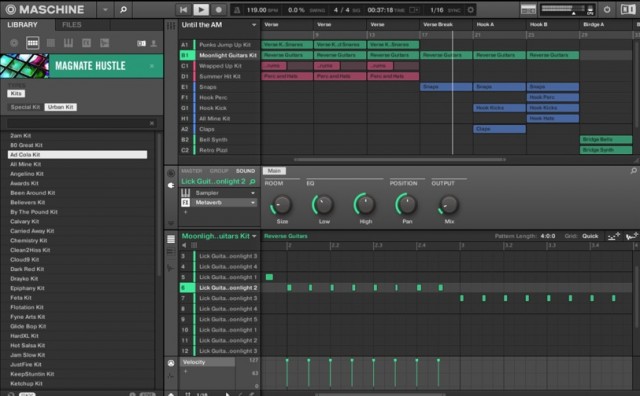 MAGNATE HUSTLE provides producers of urban pop, R&B, and hip hop with a wealth of melodic material. An exclusive selection of guitar licks and chords allows beat makers to drop melodic and harmonic elements directly into their tracks. Licks can be used as they are or be chopped up within the MASCHINE environment for adding a personalized touch to projects. A set of multi-sampled instruments including basses, acoustic and electric pianos, and synths, plus vocal hits and one-shots provide additional melodic possibilities and texture. And a set of new MASSIVE presets designed specifically for contemporary urban pop offer producers near-limitless sonic variation for their tracks.

MAGNATE HUSTLE’s selection of drum sounds includes a versatile set of samples processed for maximum punch plus four kits consisting of all-new presets for the MASCHINE 2 Drum Synths. The MASCHINE 2 Drum Synths allow users to adjust drum sounds on the fly, further tailoring the sound or adding a dynamic performance element to their music. The sounds were designed and tweaked by producers currently working on major label projects. Their expertise gives the drums in MAGNATE HUSTLE the larger-than-life sound of platinum-selling records heard in the charts worldwide.

A condensed version of MAGNATE HUSTLE is also available as an iMASCHINE Expansion, for creating beats on-the-go. The iMASCHINE Expansion features three projects, four drum kits, and three instruments. Tracks can be exported to MASCHINE STUDIO, MASCHINE, and MASCHINE MIKRO for completion.