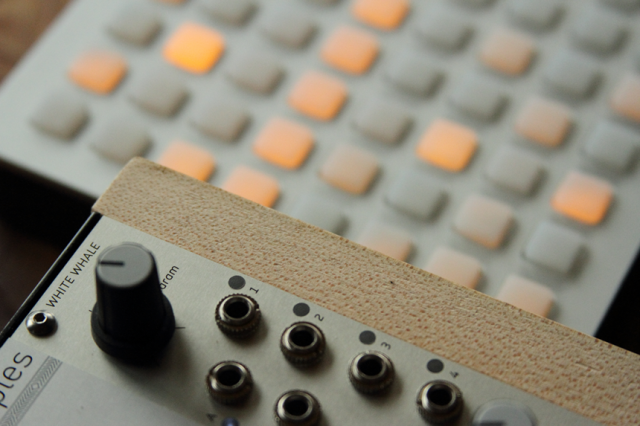 monome.org has introduced white whale – a new Euro module that lets you use a monome grid controller as the interface to a grid-enabled live probabilistic step sequencer.

According to the developers, “white whale is the culmination of methods and experiments based on a decade of step sequencer design for the grid”.

Here’s a video demo of white whale in action:

Here’s what they have to say about the new module:

a monome grid is plugged into the front panel of the module, serving as a complete interface. the sequencer continues running when the grid is disconnected, facilitating both live performance and precomposed playback of generative systems.

a sixteen step loop is the foundation. 4 triggers can be toggled per step, along with two separate cv values. 0-10v cv can be dialed via a parameter knob, copied from other steps, and tuned up and down via the grid. a cv map mode is provided for creating scales, and preset scales are recallable.

a probability index is provided independently for the triggers and each cv channel. these can serve as step mutes (at 0 or 100 percent) or chance possibility per step (for fills, emergent melody generation, etc). each cv step can be set to have a choice of several values.

sixteen patterns are quickly accessible. for longer sequences these patterns can be strung together in any determined order, including chance possibilities between pattern selection.

sets of patterns are storable to internal flash memory for instant recall on power-up.

timing can be internal (controlled via a panel pot) or externally triggered. loop lengths and positions can be set intuitively on the grid.

Here are a series of video tutorials for the white whale:

white whale has a retail price of US $280. It requires a monome as an interface; late 128 (8×16) models are recommended. See the monome.org site for more info.

If you’ve used white whale, leave a comment and let us know what you think of it!