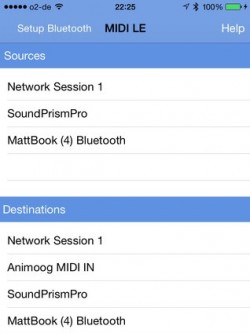 The advantage of MIDI over Bluetooth LE is that you can connect compatible devices wirelessly, without the need for a Camera Connection Kit and other gear. MIDI LE routes the virtual ports of supported music applications via Bluetooth.

Frick says that, if your favorite application was working with MIDI over WiFi in the past, it will most likely work with MIDI LE.

Bluetooth over MIDI is a newly introduced feature in iOS 8 and will also be incorporated into OS X Yosemite 10.10.

MIDI LE is ready for first adopters now – it’s a free download via the App Store.

If you’re not on iOS 8 yet, though, we recommend making sure that any music apps that you use regularly are updated for the new OS before you upgrade.

The initial motivation for was basically to write it for myself, as not a single app has this integrated right now and I wanted some way of low-latency communication (apart from CoreMIDI over WiFi or getting a Lighting-MIDI-Adapter).

I plan to release an update sometime next week to revamp the UI a bit and integrate iOS to iOS Bluetooth communication.

Frick also plans to provide examples and screenshots as soon as OS X 10.10 is officially released and is out of NDA.

If you’re an earlier adopter and give this a try, leave a comment and let us know what you tried and how it worked for you!