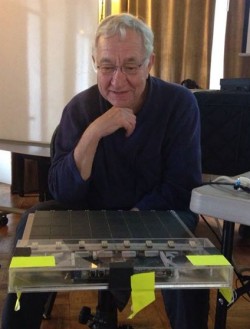 Professor David Wessel, Director of the Center for New Music and Audio Technologies  (CNMAT) at the University of California at Berkeley, passed away on October 13, 2014, at the age of 73.

Wessel was a musician, composer and mentor to many electronic and computer musicians. He was also known to some as “The Patron Saint of MaxMSP”.

CNMAT invites those in the Bay Area to come by on Friday, October 17, between the hours of 1 p.m. to 6 p.m., to share stories and celebrate Wessel’s life. The Main Room at CNMAT will be open to all those who wish to visit.

Friends and colleagues are leaving their memories of Wessel on his Facebook page.

“He shaped the lives of so many of the graduate students at Berkeley with his tremendous generosity as a thinker, interlocutor, listener, teacher, performer, and cook,” notes Yale assistant professor of music Brian Kane. “The great, electronic music studio in the sky just got a new director.”

“I mourn the loss of David Wessel, collaborator, gourmand, and best friend,” writes instrument designer Keith McMillen. “Many will speak on his many contributions to the world of modern music, especially his work in creating Max/MSP. But I just want it to be known he was a man that ate parts of animals no one would consider touching. When we travelled he would take an extra suitcase to smuggle back exotic controlled foodstuffs.”

The video below captures Wessel demonstrating the SLABS Arrays of Pressure Sensitive Touch Pads. The video highlights Wessel’s fascination with music and technology, and with combining them in creative ways:

Wessel studied mathematics and experimental psychology at the University of Illinois and received a doctorate in mathematical psychology from Stanford in 1972.

His work on the perception and compositional control of timbre in the early 70’s at Michigan State University led to a musical research position at IRCAM in Paris in 1976. In 1985, he established a new IRCAM department, devoted to the development of interactive musical software for personal computers.

In 1988, he began his current position as Professor of Music at the University of California.

Cycling ’74 interviewed Wessel in 1999 about his musical background, his work at IRCAM and his love of MAX.