The device can be used as a standalone sound generator that connects with a 3.5mm stereo jack output or to control a wide variety of machines, such as toys or synths with control voltage, clock or gate input. You can also use it as a test signal generator in your electronics lab, blink leds, drive small motors etc. 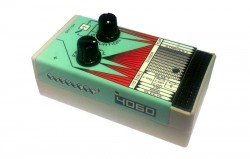 Using the 4060 doesn’t require any previous electronics skills, but experimenting with different components can help you get the idea of how they work, and your programming can become more systematic.

The name of the device comes from CD4060, which is an integrated circuit logic building block. This series of logic chips dates back to the sixties, but is still relevant in DIY. Olegtron 4060 interfaces directly with 4000B-series.

The Olegtron 4060 is based on the RC-oscillator example from CD4060 datasheet, with the addition of a starve potentiometer, known from the world of circuit bending.