Numerology is a music sequencing and audio plugin environment which uses an approach based on modular step sequencing.

In version 4.0, Numerology expands on its grid mapping for the Novation Launchpad to include support for the Ableton Push and Livid OHM RBG grid controllers. Users can also setup Numerology 4 to use several grid controllers at once, opening up new options when working with longer sequences, or for simultaneously manipulating sequence patterns and sequence ‘control’ settings (rate, direction, key, offset, etc.).

Numerology 4’s expanded support for hardware controllers also includes new options for transport and mixing oriented controllers, and improved OSC support in Numerology Pro. With these additions, users can easily configure a hardware controller setup that allows them to spend as much time away from the computer as they want.

Extending Numerology’s already generous selection of options for modulating sequences is a new feature called Realtime Automation (RTA), which allow users to record and play looped automation moves up to 64 beats long. This feature is can be accessed by mapping a MIDI (or OSC in N4 Pro) controller to trigger RTA recording. Once triggered, RTA recording captures all parameter edits made by a hardware controller to internal automation buffers. RTA recording auto-stops after a set number of beats, then immediately plays back all automation moves.

Among other general workflow improvements, Numerology now includes a comprehensive multi-panel browser for managing module presets, exported stacks (which are a collection of connected modules), audio and MIDI files. Users can easily setup custom module and stack libraries of their own via drag-and-drop to the browser. The audio section of the browser includes a preview panel and an ‘auto play’ mode for very fast auditioning of audio samples.

Numerology 4 includes a much-improved built-in sampler. Based on Numerology’s previous DrumKit and SamplePlayer modules, the new SampleKit has an updated UI with a zoomable waveform display, a convenient outline-based layout, and proper support for multi-part patches. Also included with Numerology 4 is a new set of demo projects, stacks, sound patches and samples. Though not large by modern standards, this new library is specifically designed to show off Numerology’s compositional flexibility, including pop and funk tunes, dance music, classic synthesizer tracks, and several excursions into the exploratory world of experimental and generative musics. 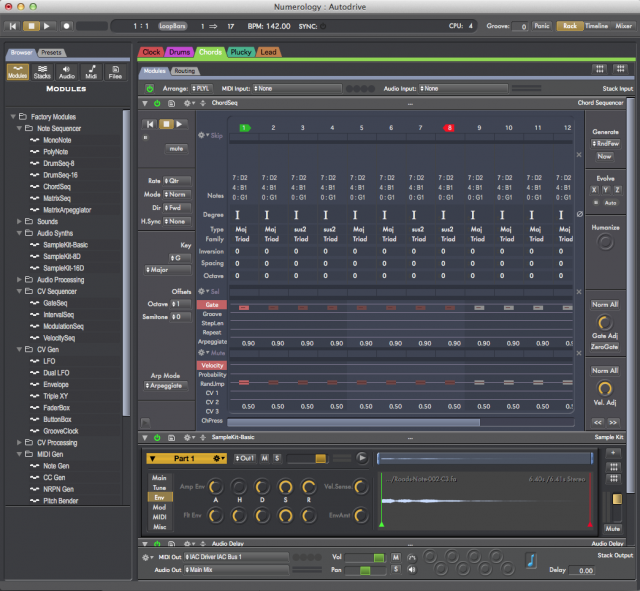 Other new features in Numerology 4 include:

Additions specific to Numerology 4 Pro include:

Upgrades from Numerology 3 are $39 until December 27th, $49 thereafter. For more details, demo downloads and videos, see the Five12 site.