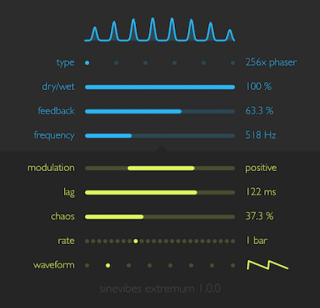 According to the company, Extremum was built with one huge goal: ‘to turn even the most simple sounds into insanely interesting, tonally rich and exciting new materia’l.

Extremum features a collection of phaser, chorus and filter algorithms, comprised of up to 256 stages and 16 feedback lines – all of which apply radical but finely controllable transformations. To take it even further, Extremum has its own tempo-synchronised modulator with multiple waveforms, variable lag and chaos.

Extremum is available now for $29 via the Sinevibes site. Audio demos and a demo version are also available.