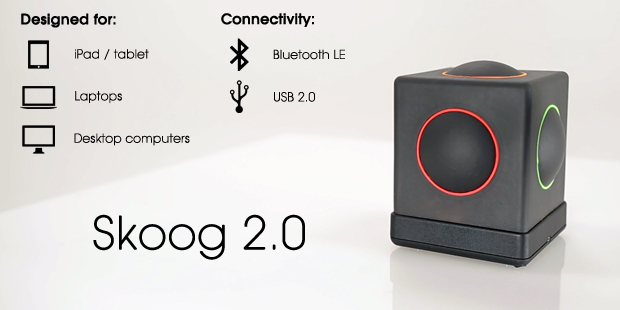 SkoogMusic CEO David Skulina let us know that their IndieGoGo campaign for the Skoog 2.0 accessible MIDI controller has more than doubled its funding goal, with two days left in the campaign.

Their initial campaign missed its funding target, so SkoogMusic modified its project plan, deferring Android support until later in their timeline and moving forward development of an Ableton Live plugin.

While the original Skoog was designed to be an accessible MIDI controller design, with Skoog 2.0 the company is highlighting features intended for a broader audience of electronic musicians:

For all the electronic musicians, producers, sound designers and sonic adventurers out there, Skoog 2.0 gives a new hands-on way to manipulate sound.  With it you can vary multiple parameters at once to perform musical gestures that might require a third hand with standard controllers. Powerful sensors detect how and where the body of the Skoog is deformed in 3D.  By mapping sonic parameters to the sensor data, a single gesture can be used to produce complex musical expression.

All Skoog perks come with Skoogmusic software for iPad, Mac and PC included, so you can have fun exploring the musical possibilities with the physical modelling and subtractive synthesis sound engines that we’ve designed to work with Skoog.

If you’d like to take things further, in May 2015 we’ll be launching our Ableton plugin, so you can setup your Skoog to control pretty much anything your imagination can conjure up using Ableton Live.   On top of that we’ll be releasing an API in summer 2015 that will mean that you can start integrating Skoog into your own software.

Details on the Skoog 2.0 are available at the campaign site.