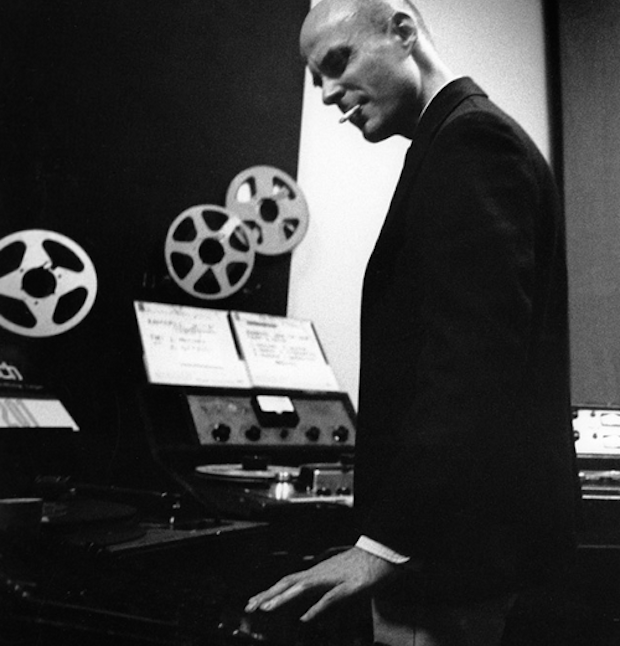 Dockstader was a self-taught musician and he event went so far as to call his work ‘organized sound‘ (like Edgar Varése), to distinguish it as something different than traditional composition.

Dockstader worked as a film editor and sound engineer in Hollywood in the late 1950’s, and started creating musique concrète works at Gotham Recording Studios, in his spare time.

He released his first album, Eight Electronic Pieces in 1960. Music from the album was later used on the soundtrack to Federico Fellini’s film Satyricon in 1969. He was very active as a composer in the 1960’s, releasing multiple albums, including Quatermass, a work some consider to be his masterpiece.

His lack of traditional music training ultimately put the brakes on his music career, because he was unable to find work at electronic music studios. Instead, he took his talents to the field of education, writing, editing and creating soundtracks for films for classroom use.

In recent years, some of Dockstader’s works have been rereleased by Starkland. Interviews with Dockstader, a discography and more are available at the Unofficial Tod Dockstader Site.

Here’s what Dockstader had to say, in reflection on his 1960’s tape music:

Some composers who worked in what’s been called the “glorious junkshop” of the now-classic tape studios have looked back in awe and dismay at the amount of hard, physical work it took to make a piece.

But easier isn’t necessarily better. I enjoyed it: I found it was like the best part of painting – standing on your feet all day, moving around, working with your hands, sometimes very fast, more often very slowly, mixing, cutting, stitching it together with the sound in your ears. It had a muscular joy to it.

I think a lot of us had fun up on that singing high wire, teetering between control and chaos, trying to push the sound a little farther toward Something we hadn’t heard before, working in it… Listening.

One good thing about music, when it hits you, you feel no pain.