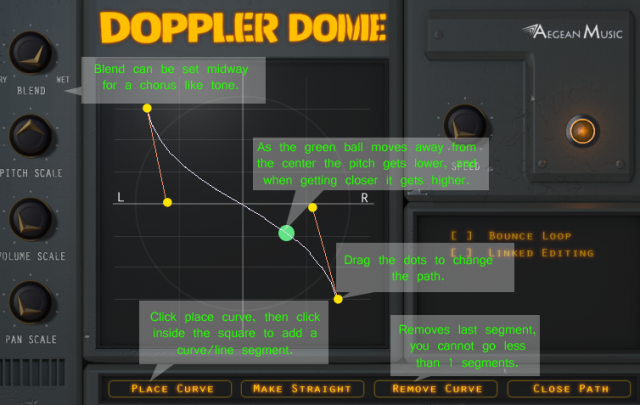 Aegean Music has released Doppler Dome a free audio plug-in, for Mac & WIndows, based on the Doppler effect.

Explained simply, the Doppler effect is something that happens to sound when the listener and the sound source are getting closer together or farther appart. For example, a car sound when you are in the car might have a particular frequency, but the frequency will be lower if the car is moving away from you, and will be like a record played at a lower speed. If the car passes right by you it will be high as it gets closer and then low as it gets farther. Doppler dome lets you adjust the amount of the pitch effect as well as pan and volume based on distance.

In Doppler Dome, the center is the listener and the sound source moves along a path. Drag the dots to adjust the path’s bezier curves. The path can act like an LFO, or a loop. A midi note in message sent to the plugin will reset the path position to sync it with the project.

The buttons and switches can be used to set up curves and lines for the path (mouse over them to see their description).

Doppler Dome is a free download from the Aegean Music site.

One thought on “Free Doppler Effect For Mac & Windows”