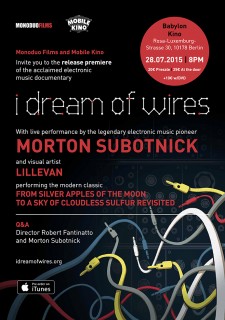 I Dream Of Wires – a documentary about modular synths and synthesists – is getting its first public showing in Berlin tonight.

To celebrate the film’s August VOD/DVD release,  MONODUO FILMS and MOBILE KINO are presenting a special screening and electronic music event in Berlin, followed by a live performance by Morton Subotnick.

As a founding member of the seminal San Francisco Tape Music Center, Subotnick played a key role in the conception and development of the Buchla modular synthesizer. Armed with his Buchla, Subotnick composed and recorded the landmark 1967 LP, SILVER APPLES OF THE MOON, widely regarded as a modern classic, and the first all-electronic music album to connect with popular music audiences. In 2010 SILVER APPLES was selected for the National Recording Registry of the Library of Congress. .

The film will be introduced by director Robert Fantinatto, who will also join Morton Subotnick for a post-screening Q&A. This July 28 event is more than just a celebration of the modular synthesizer; it’s a rare opportunity to learn and experience the historical roots of electronic music.