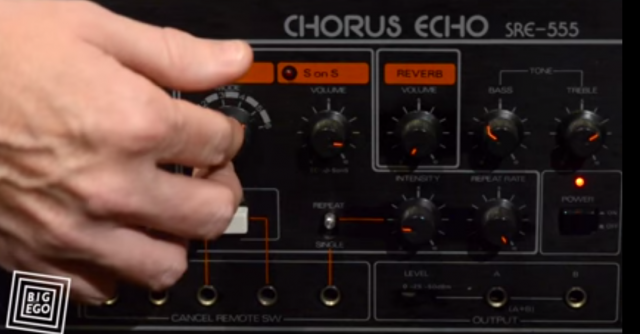 Here’s what Schlarb has to say about the Roland Chorus Echo:

The Roland Chorus Echo is an analog tape echo, chorus, and spring reverb rack effect unit released in 1982. It is one of my favorite things on the face of the earth.

The unit features three playback tape heads which can be used independently and in combination. There are also two additional effects circuits that can be switched in and out: lush analog chorus, and a vibey, metallic spring reverb.

The SRE-555 was the last tape echo machine Roland ever manufactured. It’s an incredibly robust and well made piece of equipment and I can think of anything that comes close to the sonic and creative possibilities this unit offers. It lives on one of my consoles effect sends and I use it on almost every record I produce and mix.