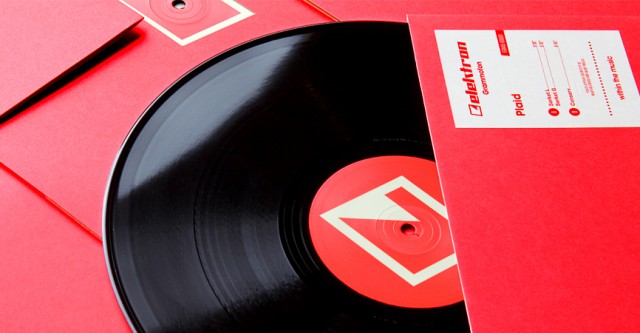 Elektron has announced that the first release on its Elektron Grammofon record label, Plaid’s EGR45-00001, is now available as a limited vinyl release.

Plaid — Ed Handley and Andy Turner — have been actively making electronic music seething with warmth, melody and quirk since the early 90’s. They have done collaborations with filmmaker Michael Aria, Björk and a Gamelan group, among others. They’ve made original music for feature films and video games.

Some of their most distinctive albums are Double Figure (2001), Scintilli (2011) and Reachy Prints (2014). Click on the image below for a comprehensive interview with the duo.

The 12″ vinyl will be available in a strictly limited one-off pressing of 300 copies.

All the proceeds of Elektron Grammofon will be donated to a charity chosen by the featured artists. Plaid have chosen the Macmillan Cancer Support, a British charity that provides specialist health care, information, advice, financial and emotional support to people affected by cancer.