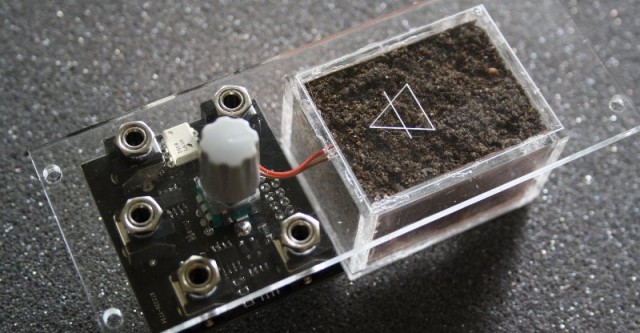 The ERD modular eurorack series promises to put dirt in your modular synth.

According to the developer, they aim ‘to infect and contaminate the world of Eurorack with a radical, new artistic sensibility.’

ERD/ERD (Earth Return Distortion) is the first and most extreme expression of the ERD philosophy, seeking to literally put the earth back into circuit with technology.

All world electricity travels through the earth and nearly all electronic circuitry and devices are extracted and refined from the earth. ERD/ERD puts a small block of forest earth into the Eurorack circuit, allowing control and audio signals to be distorted and amplified as they pass through the earth block.

It can be viewed in conventional terms as an earth conditioned VCA (amplification factor by knob control or CV) and distortion. Local electrical and atmospheric signals can condition and distort the earth signal.

Here’s a preview of the ERD/ERD in action:

In this recording a sine from RS-95e is passed through earth and modulated in ERD/ERD by a triangle living VCO.

The ERD/SIR is a digital/analogue module which can be used as a stochastic, chaotic pattern and waveform generator.

The three knob controls and CV can be used to change the speed of simulation and output voltage, the selected plague and instruction set, and to actually input instructions, live coding style, into the simulated plague processors or CPUs.

Each series will be sold in a limited, strictly numbered edition of 40 modules each. Future modules planned for 2015 and early 2016 include: ERD/?, a radioactive source and true random voltage generator, and ERD/WORM speech synthesizer and vocoder.