On Saturday night, Sept 26, the CalArts School of Music will host a Farewell Concert for composer and educator Barry Schrader, right, who has been on the staff there for 45 years.

Schrader started composing electronic music in 1969 and joined the staff at CalArts in 1971. In the years since, he’s taught two generations of students, composed dozens of works and even scored several films, including an electronic score for the low-budget sci-fi film, Galaxy Of Terror.

Schrader is also founder of SEAMUS (Society for Electro-Acoustic Music in the United States). You can find out more about him in from our own Barry Schrader interview, more recent interviews at Tokafi and Matrixsynth and at his own site. 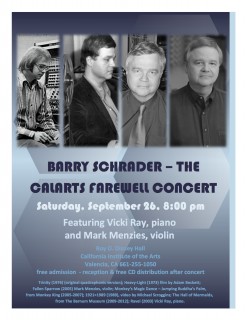 The concert will feature Mark Menzies on violin playing Fallen Sparrow, and Vicki Ray on piano performing Ravel. Also on the concert will be the original quadraphonic version of Trinity, along with short sections of Monkey King and The Barnum Museum. Adam Beckett’s groundbreaking 1973 film Heavy-Light will be shown, along with Michael Scroggins early computer video, 1921>1989.

There will be a reception following the concert and a limited number of Schrader CDs will be given away to those attending the event. For those that wish to view the concert online, it will be available live.