Teased out by Novation with several weeks of “start something”-themed videos, Novation has positioned Circuit as an all-in-one solution for music creation:

“Sometimes, starting a track can be a difficult and daunting task…. We suffer from this problem too and wanted to create a solution.” 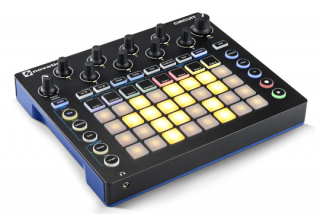 Circuit combines what the manufacturer is calling “Nova-heritage” synths with “expertly sculpted” drums, a basic bit of kit for creating an entire tune.

The battery-powered groove box lets you combine up to 128 steps of synth and drum patterns, and subsequently add space, depth and energy to the music with built-in effects. Circuit also has built-in sidechain, and finished creations can be saved to one of 32 slots.

Under the hood, Circuit consists of two Novation polysynths and a four-part drum machine with a 4×8 RGB velocity-sensitive grid sequencer and built-in speaker, all in a standalone box.

The groove box also works with the user’s sound system, computer, and other synth gear, via its Line outputs, USB and MIDI ports.