The recently-introduced Roland Boutique synthesizer line has been one of the most discussed and debated synth introductions of 2015.

A lot of people don’t know what to make of them yet. The Boutique synths are surprisingly tiny, but they offer easy-to-understand ‘knob-per-function’ interfaces and promise to deliver accurate emulations of three vintage Roland synths.

This review, by reader Robert Dorschel, takes a look at the Roland JU-06 synthesizer – a modern take on the Juno-106. It’s not written or structured as a formal review, but – as Dorschel notes – it captures his raw impressions.

I’d like to be transparent and say my first synth was an Alpha Juno-1 (and I still have it— I’m an original owner!); my best friend at the time had a Juno-106. A few years later, I owned a Juno-60. 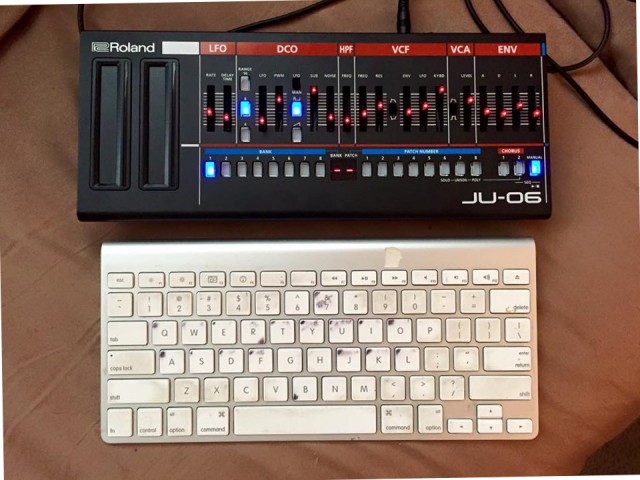 Here are my random, raw, in no particular order impressions about it, for your consideration: 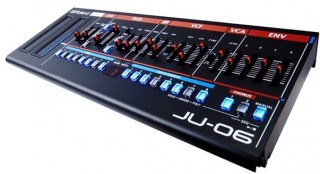 I found one potential dealbreaker for some folks: it does not send any of its sliders or buttons over MIDI (5-Pin or USB).

For me this is no big deal, just record in real time. I also doubt there are MIDI CC commands per parameter either. So all things considered… it’s not a MIDI powerhouse: it’s a synth module. Period. So I guess folks will have to learn how to play on the fly, and record twiddly parts direct to audio, live. (Although, who knows, this could change with a firmware update.)

(Editor’s note: Other readers have noted that the JU-06 sends CC commands when in Chain mode. )

Another odd behavior, and potential dealbreaker for some: When you enable Chain Mode, this is what happens:

If you’re holding down the sustain pedal, and when you play that 5th thru 8th note, wow, hey, it works. But when you hit note #9 and up? It will voice steal from the slave synth. There is no feedback back to the master synth over MIDI; so the first four notes will continue to sustain. Not quite what people will expect from a last-note-priority synth.

Also, Chain Mode appears to only work over 5-PIN MIDI, not over USB MIDI.

Note:  I tested this with one unit, but watching the MIDI data stream using “MIDI Monitor” app on OSX.

How Does It Sound?

Did I mention the chorus noise? The eye-roll of having too many Roland “E-Piano” patches? The low-end ball-shaking bass? Thick pseudo-analog strings that you can chew on?

Hope you get something out of this review. Off to go write some music now!

Have you used the Roland JU-06 synthesizer? If so, share your thoughts on it in the comments!

Robert originally shared his thoughts on the JU-06 via Facebook; we’ve reproduced them here, along with his photos, with his permission.

Listening to an extremely gradual musical process opens my ears to it, but it always extends farther than I can hear, and that makes it interesting to listen to the musical process again.