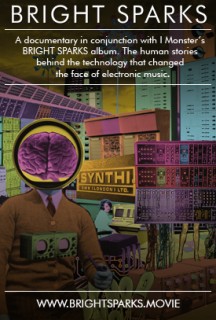 Bright Sparks, a new film + album project that pay tribute to electronic music pioneers, is now available via its website.

The project began as a concept album by I Monster, inspired by various people and companies involved in the early days of the synthesizer. The began to look for a more interesting way of presenting the record and approached Dave Spiers and Chris Macleod, vintage synthesizer curators and the owners of GForce Software.

The idea then developed into the production of a combined digital package consisting of the Bright Sparks album and accompanying documentary.

Picking a number of the most influential companies (Moog, Buchla, ARP, Chamberlin, Mellotron, EMS, EDP and Freeman), the album was recorded using a number of their most revered synthesizers, while the feature length documentary includes interviews with many of the key personnel involved in the development of the instruments including Peter Zinovieff (EMS), Ken Freeman (Freeman), Herb Deutsch (Moog), Alan Robert Pearlman (ARP), John Bradley (Mellotron).

The film and album are available for download from the Bright Sparks site, and the album will be physically released on Friday February 26th 2016 on I Monster’s own label, Twins Of Evil.