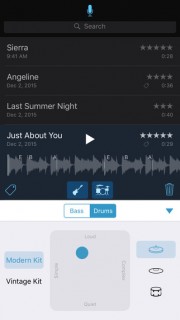 Apple today introduced Music Memos, a free app for iOS that lets you quickly capture, organize and develop musical ideas on your iPhone or iPad.

Musicians and songwriters around the world have used the Voice Memos app on their iPhone to record ideas. The new Music Memos app is inspired by Voice Memos and takes the functionality even further, by adding musician-friendly features designed specifically for songwriting and developing musical ideas.

With Music Memos, you can record any musical instrument through the iPhone’s built-in microphone in a high-quality, uncompressed format, then name, tag and rate it to start building a library of your ideas.

The app can analyze rhythm and chords of acoustic guitar and piano recordings, and instantly add drums and a bass line to provide a virtual, customizable backing band that plays along to match the feel of your song. Music Memos can even provide basic notation that displays the chords that were played.

With iCloud, Music Memos are automatically available across all your Apple devices so you can open them in GarageBand or Logic Pro X to further develop your songs.

“Sometimes ideas come faster than I can get them into my notebook so I’ve used Voice Memos and Notes to quickly capture songs before they’re lost. Music Memos is like if those two apps came together to form some kind of superpower for songs,” said producer & songrwiter Ryan Adams. “It quite literally blew my mind how Music Memos could transform a single guitar idea into a whole composition with a virtual drummer loose enough that it felt like you were having your mind read by some A.I. musician and a choice of stand-up or electric bass accompaniments.”

Music Memos is available for free on the App Store and is compatible with iPhone 4s and later, and iPad 2 and later.

14 thoughts on “Apple Intros Music Memos For iOS, Like ‘Voice Memos For Music’”