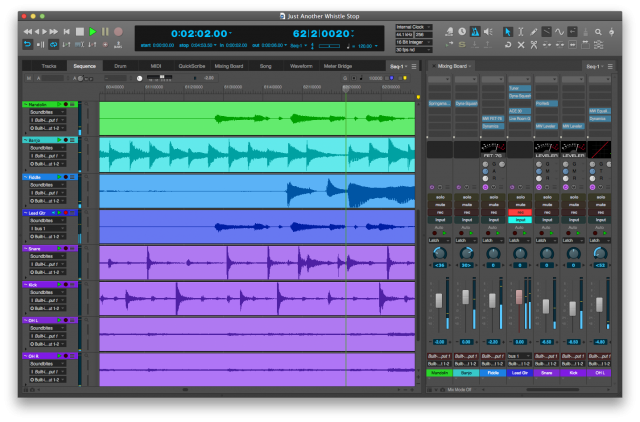 At the 2016 Winter NAMM Show, MOTU was demonstrating updates to Digital Performer 9 that they say make its faster and more efficient and also introduce new plug-ins.

“The next few updates of Digital Performer are all about squeezing every last CPU-cycle and sample buffer out of today’s incredibly fast computers,” says MOTU’s Jim Cooper. “DP users will enjoy state-of-the-art CPU efficiency and low-latency performance, regardless of the Mac or PC system they use, making the flexibility of a host-based workflow increasingly more powerful and compelling.”

While individual results will certainly vary depending on the computer system and VI’s being used, DP users will experience a significant performance boost from the Next-gen Pre-gen engine. In one bench test, Digital Performer was able to run ten times the number of virtual instruments with the enhanced Pre-Gen mode engaged, compared to real-time operation. Bench tests also show that Digital Performer can run up to four times as many virtual instruments as another popular DAW. During the NAMM show presentation, Digital Performer ran over 150 instrument instantiations from the CPU-intensive, Kontakt™-based Cinesamples™ orchestral library on a Mac Pro cylinder. With DP’s audio engine buffer set to an ultra-low 64 samples (which produces virtually imperceptible latency for virtual instruments), DP’s CPU meter hovered at an efficient 20-30%.

DP’s host buffer latency has been cut in half, resulting in industry-leading overall latency performance. In a round-trip latency (RTL) test using a MOTU 1248 Thunderbolt audio interface, DP achieved roundtrip latency of 1.39 ms with a 32 sample buffer at 96 kHz. This result matched or bested other major DAWs currently available.

The new SMPTE-Z plug-in generates Longitudinal Time Code (LTC) while locked to DP’s timeline or while running independently in Freewheel mode. The Stillframe option causes time code to continue to be generated even when DP’s transport is stopped (parked on one frame). Timecode can be routed anywhere via the audio track’s output assignment, allowing users to achieve accurate time code sync in a wide variety of situations.

DP’s new Hardware Insert plug-in functions just like other DP effects plugins, but loops the channel’s audio signal to a piece of outboard hardware for external processing by the hardware. It can be instantiated in line with other software plug-ins and even saved as part of an effect chain clipping. The plug-in includes a button that pings the external hardware, measures the resulting latency and automatically compensates for it. Finally, DP users can easily incorporate outboard gear into their DP effects chains.

Dozens of additional workflow enhancements include the ability to save and recall sets of visible tracks in DP’s track selector, which lets users show and hide tracks in the Tracks Overview, Sequence Editor, Mixing Board and other windows. Support for video playback through third-party video hardware (from Blackmagic Design and AJA Video Systems) has also been added.

MOTU expects to ship the Workflow enhancements with Digital Performer 9.02, to be released in Q1, 2016. The Next-gen Pre-gen engine, latency enhancements, SMPTE-Z plug-in and Hardware Insert plug-in will be released in a free update in Q2, 2016.