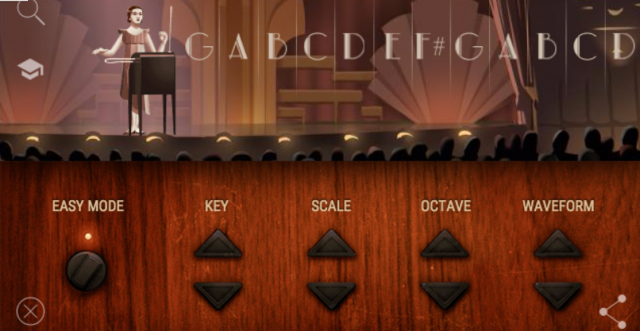 The theremin is notoriously difficult to play in tune, but Rockmore demonstrated that, in the right hands, it could be a capable and expressive instrument.

Here’s what Google has to say about the theremin Google Doodle:

Clara Rockmore made music from thin air. Trained from a young age as a violinist, Rockmore ultimately gave up the violin due to physical strain. This led her to discover the theremin, a gesture-controlled instrument named after its inventor, Léon Theremin. Not only did Rockmore become the instrument’s most well-known performer, she also influenced its development. She convinced Theremin that it should be made more responsive and offer a greater range of notes (5 octaves instead of 3). Though electronic music was uncommon in formal music settings in the 1930s, Rockmore performed as a soloist with the New York Philharmonic, the Philadelphia Orchestra, and the Toronto Symphony.

Today’s interactive Google Doodle was created by artist Robinson Wood, interaction designer Kevin Burke, and engineers Will Knowles and Kris Hom (with support from the larger Doodle engineering team). The team translated the movement used to play the theremin—one hand controlling pitch and the other volume—to an interactive module, where a point of light controls volume and pitch. Sound designer Manuel Clément helped with the button sound effects.

Engineer Will Knowles explained that the first attempt at recreating the theremin sound was fairly straightforward: just a “single oscillator producing a wave at a given frequency.” But Knowles and his team wanted to create a sound quality that resembled Rockmore’s own playing. “To accomplish this,” he said, “we worked with the Chrome WebAudio team and theremin expert Mark Goldstein to create smooth sliding between frequencies and scaling vibrato to simulate her masterful play style.” They also used filters to get across a “a softer, more aged feel.”

Robinson Wood and Kevin Burke also reflected Rockmore’s world in the visual design of the Doodle, with Art Deco-styled imagery and other period details. “We wanted to give the theremin’s controls a feel of realism,” Burke said, “so the knob textures were rendered to mimic Bakelite, the early plastic. We chose the wood texture for its similarity to the wood of Clara’s RCA theremin.”

Today’s celebration of Clara Rockmore is a natural accompaniment to Google Creative Lab’s launch of the Chrome Music Lab. In the words of designer Alex Chen, the Music Lab aims to “create simple ways for anyone, of any age, to explore how music works.”