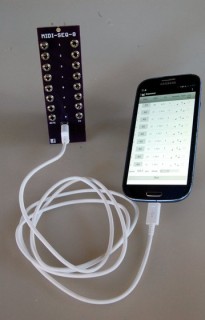 The Interface is sold as a full kit, consisting of a set of 2 high quality PCBs, front panel, all basic and precision components and a pre-programmed PIC processor.

The developer says that “The Midi-Seq-8 delivers the convenience of a smartphone or tablet-driven sequencer that directly controls your analog monophonic synthesizer from your Android device.”

The module connects to your Android device using a micro USB cable. It uses a PIC 24 bit microprocessor to convert MIDI messages from the Android app into digital codes which are then converted into gate/trigger and control voltages for 8 channels with TI DACs. These are buffered with precision TI op amps, providing precise tracking over three octaves and to within 0.01V over 5 octaves.

The Interface is available via Pmfoundations for US $149, and the software is a free download via the Google Play store.