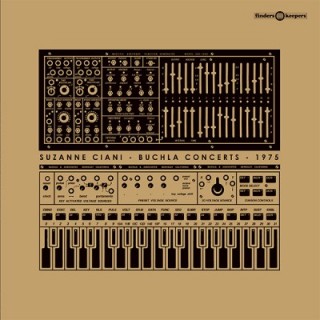 Finders Keepers has announced a new album by pioneering synthesist Suzanne Ciani, Buchla Concerts 1975, that they describe as ‘a distinctive feminine alternative to Silver Apples Of The Moon‘.

This record is a triumphant yardstick in the synthesiser space race and the untold story of the first woman on the proverbial moon. While pondering the early accolades of this record it’s daunting to learn that this record was in fact not a record at all… It was a manifesto and a gateway to a new world, that somehow never quite opened. If the unfamiliar, modernistic, melodic, pulses, tones and harmonics found on this 1975 live presentation/grant application/educational demonstration had been placed in a phonographic context alongside the promoted work of Morton Subotnick, Walter Carlos or Tomita then the name Suzanne Ciani and her influence would have already radically changed the shape, sound and gender of our record collections. Hopefully there is still chance.

These “concerts” are the epitome of rare music technology historic documents, performed by a real musician whose skills and academic education in classical composition already outweighed her male synthesiser contemporaries of twice her age. At the very start of her fragile career these recordings are nothing short of sacrificial ode to her mentor and machine, sonic pickets of the revolution and love letters to an absolutely genuine vision of and ‘alternative’ musical future. In denouncing her own precocious polymathmatic past in a bid to persuade the world to sing from a new hymn sheet, Suzanne Ciani created a bi-product of never before heard music that would render the pigeon holes “ambient” and “futuristic” utterly inadequate. Providing nothing short of an entirely different feminine take on the experimental “records” of Morton Subotnick and proving to a small, judgmental audience and jury the true versatility of one of the most radical and idiosyncratic musical instruments of the 20th century. These recordings have not been heard since then.

The importance of these genuinely lost pieces of electronic musics puzzle almost eclipses the glaring detail of Suzanne’s gender as a distinct minority in an almost exclusively male dominated, faceless, coldly scientific landscape. Those familiar with Suzanne’s work, a vast vault of previously unpublished “non-records”, will already know how the creative politics in her art of “being” simultaneously reshaped the worlds of synth design, advertising and film composition before anyone had even dropped a stylus in her groove. Needless to say this record, finally commanding the archival format of choice, courtesy of the Ciani and Finders Keepers longstanding unison, was not the last “first” with which this hugely important composer would gift society, and the future of a wide range of exciting evolving creative disciplines.

You have found a holy grail of electronic music and a female musical pioneer who was too proactive to take the trophies. With the light of Buchla and Ciani’s initial flame Finders Keepers continues to take a torch through the vaults of this lesser-celebrated music legacy shining a beam on these “non-records” that evaded the limelight for almost half a century. You can’t write history when you are too busy making it. With fresh ink in the bottomless well, let’s start at the beginning. Again. You, are invited!

Here are the official audio previews: