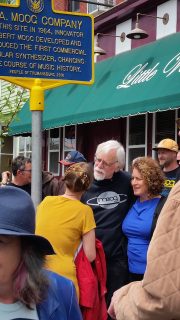 Village of Trumansburg, NY has installed a new historical marker, placed outside of the building that housed the original R.A. Moog company on Main Street.

The building is where the Moog modular and Minimoog were developed and produced.

Michelle Moog-Koussa, Executive Director of The Bob Moog Foundation, and composer David Borden (Mother Mallard’s Portable Masterpiece Company) unveiled the new historical marker as part of Trumansburg’s MoogDay: A Celebration of Robert Moog in Trumansburg. In addition to the unveiling, activities included historical talks and an evening of Moog-centric music.

At this site in 1964, innovator Robert Moog developed and produced the first commercial modular synthesizer, changing the course of music history.

Moog-Koussa is currently working with Robert Fantinatto and Jason Amm – the team behind the modular synth documentary I Dream Of Wires – on a new documentary about Bob Moog, Electronic Voyager. Their goal for the documentary is to ‘create a definitive and personal documentary about the life of iconic synthesizer pioneer, Bob Moog (1934 – 2005).’

They are funding the film via a Kickstarter project, which is at about 80% of its funding goal, with a few days left in the campaign.