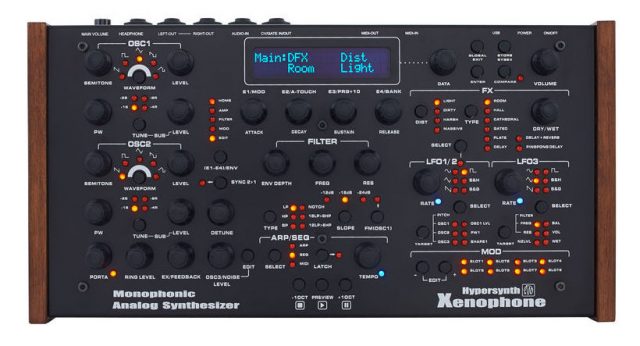 HyperSynth has released a major OS update v2.0 for Xenophone. The update adds a new duophonic mode, along with other additions and bug fixes.

Xenophone is primarily a mono-synth with three oscillators. Now, with a software upgrade, it can be played like a 2-voice paraphonic synth. Oscillator 1 plays the first note and Oscillator 2 and 3 play the second note, while each each oscillator has a dedicated VCA and Amp envelope.

Here’s a video demo of the new duophonic mode:

The new firmware is a free download from the Hypersynth site.

HyperSynth has also announced that the Mac version of XEditor (software editor for Xenophone) is in the works, and is expected to be released at the end of July 2016. The Mac version will be compatible with OS X EL Capitan and available as a standalone application and Audio Unit (64/32-bit) format.