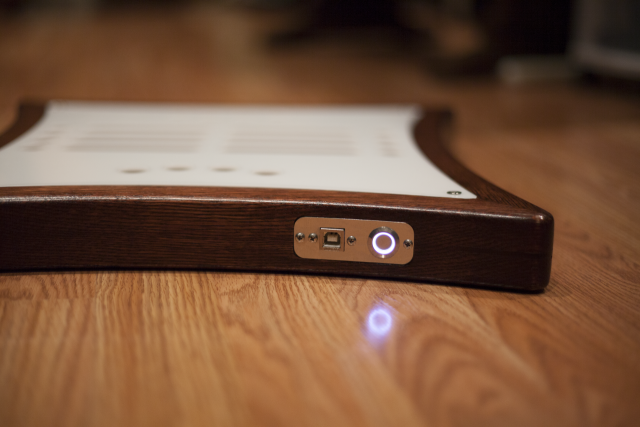 The Mune is a new MIDI controller, designed to be used as an expressive live performance instrument for electronic music.

Unlike many controllers, the Mune can be held by the performer to face the audience, allowing the audience to see what you are doing. And built-in wireless support lets you step away from your computer.

Staniland had been composing electroacoustic music, combining the instrumentation of classical music with digital sounds and effects, but he felt that performing using current digital interfaces left something to be desired.

“I found that I was at a disadvantage making music electronically, because, while I was doing a lot of things on stage like the other musicians, there was no visible cause-and-effect between my actions and the sound,” explains Staniland.

Staniland began a research project, with the objective of creating a more satisfying electronic music performance instrument. Stevenson met Andrew Staniland initially focused on the problem of creating an interface that could face towards the audience and make interactions visible – and also to match the expressiveness and sensitivity of an acoustic instrument.

After creating and using four prototypes, the duo decided to produce the instrument commercially.

The developers plan to launch a crowdfunding campaign in August to produce the Mune. See the Mune Music site for more info.