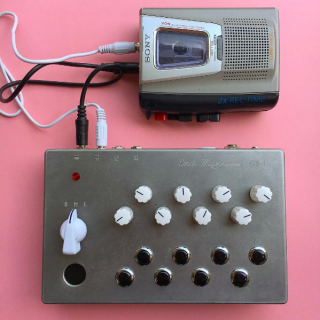 The OM-1 Cassette Synthesizer is an analog musical instrument, built around the concept that when a continuous tone/note is recorded to tape, its pitch will change as the tape’s playback speed is increased or decreased.

Individual notes are playable via the 8 button keys, each with a tuning knob directly above it. The knobs let you configure the speed of the cassette, so you can tune the cassette’s playback.

The volume of the notes can be articulated by using the pressure-sensitive volume control. The harder its pressed, the louder the note.

A three-position switch controls attack/release response of the audio output – Short, Medium, and Long. CV/Gate inputs allow control over the cassette’s pitch and volume from a linear (non-quantized) voltage sequencer.

Other cassette-based instruments include the Motor Keys Tape and the Human Controlled Tape Transport.

Here’s a video demo of the OM-1 Cassette Synthesizer:

Here’s a short guide to operating the OM-1:

The OM-1 Cassette Synthesizer is available now, made-to-order, for US $285.