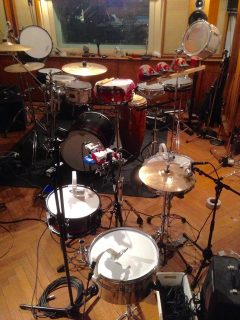 Mouse On Mars (Jan St. Werner and Andi Toma) have released a preview of their new EP, Lichter, that features music created for electroacoustic MIDI robots.

Lichter is the first piece in a new series of electroacoustic dub compositions by Mouse on Mars.

It is a massive, lurching, up-tempo percussive epic – a long-haul runaway train that keeps switching tracks without ever losing sight of its destination.

Like much of Mouse on Mars’ output, Lichter deftly traverses a varied sonic landscape, encompassing elements of jazz, dub, krautrock juke and psychedelia.

The basic layers were produced with a feedback software called smrph, and were edited, arranged and used as a foundation for various live and studio improvisations.

The 13min track, Lichter, is a concentration of these various layers. Lichter is also composed for live performance and performed live it employs a custom network of light-bulbs, triggered by data derived from the sounds and pulses of the composition.

You can preview Lichter below:

Lichter is scheduled to be released Sept 2nd on Infinite Greyscale records.