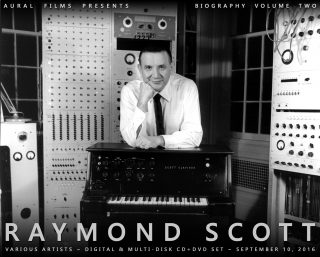 Aural Films has announced a call for submissions, asking audio and video artists from around the world to create their very own tribute to Raymond Scott and the many great things that were brought to life by Manhattan Research Inc.

Raymond Scott wore many hats – composer, bandleader, arranger, engineer, orchestra conductor, inventor and electronic music pioneer. His work is widely known from its use in Warner Brothers Cartoons scores. In his later career, his inventions allowed him to create futuristic sounds that were in-demand in advertising new digital computers, consumer electronic and other space-age products.

Here’s what Aural Films has to say about the project:

We have been granted exclusive rights from the Raymond Scott trust (Reckless Night Music LLC) to sample and incorporate with your submitted tracks. Audio material from the Manhattan Research Inc. CD collection released by Basta records in 2000 (restrictions apply – see project submission guidelines).

What’s even more exciting, is your work on this project will become part of the official Raymond Scott music library for their future use in supporting and promoting Raymond Scott’s legacy. Please see the guidelines and submission form below on how to participate.

The Raymond Scott Biography project will be released on digital download and physical Multi-Disc set including audio CD(s) and video DVD(s). To be released by Aural Films on Raymond Scott’s birthday, September 10th 2016.

The deadline for submissions is August 20, 2016. Full project details can be found at the Aural Films site.