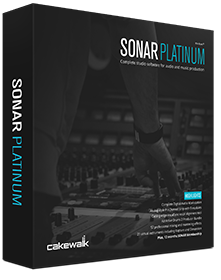 Cakewalk recently released an update for their Sonar Platinum version which has “significantly refined” the look and feel of Sonar by developing a proprietary Theme Editor for the program.

Based on positive community feedback on the recent Tungsten theme, users can now change colors and customize images across the program using an external image editor such as Adobe Photoshop, or free options like Paint.net or the GNU Image Manipulation Program (GIMP). The Sonar Theme Editor also installs a number of images that can be used to modify a theme without requiring any graphics skills; allowing users to alter common elements easily. The Theme Editor is a separate, Platinum-only installation, and needs to be installed via the Cakewalk Command Center.

For users of all levels of Sonar, Cakewalk has updated the Smart Swipe feature with greater functionality and more options, including the ability to cancel a swipe by reversing the direction back to the same control where the operation started. Further, many more controls across all Sonar Views are now eligible for the Smart Swipe feature.

Other updates to the program are enhancements to the LP MB and LP EQ Mastering Plugins which include side-chaining capability (LP MB only), better phase accuracy and GUI improvements, among others. Rounding out this update is Russian localization for all Sonar versions (as well as the Cakewalk Command Center) which have had their menu items and many other elements translated to Russian. This adds to the extant English, French, German, Spanish, Italian, Japanese, and Chinese versions.

Pricing and Availability. The Sonar 2016.07 update is available as a free download from the Cakewalk Command Center to all current Sonar Artist, Professional and Platinum customers. All three Sonar versions are available globally through music and sound retailers, Valve’s Steam Store, and the Cakewalk Store. See the Cakewalk site for complete version details and localized pricing/availability options.

For more information on the “curated improvements and enhancements” in the Sonar update, please see the free SONAR Membership Release monthly eZine. Visit the Cakewalk website to learn more about this latest Sonar release and read about plans for future updates.