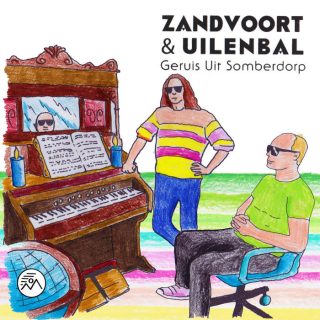 The album, by Zandvoort & Uilenbal {Wolfers and Jimi Hellinga) is a concert, originally commissioned for the Dutch classical Concertzender broadcast corporation, in early 2016.

Geruis uit Somberdorp (Rustlings from Somberville) is influenced by the ‘idea of the somber coastal village’.

It was composed and recorded in the seaside town of Scheveningen (Holland) during the mundane atmosphere of a North Sea winter.

Musically the instruments are all their opposites: The old wooden harmonium, the sizzling electricity of the Trautonium and the digital sprinkle of the synthesizer. They all merge into an arcane porridge that stretches many centuries.

We can hear touches from the ‘madrigale spirituale’ of Renaissance madman Carlo Gesualdo de Venosa all the way to the hypnotic disymetrical patterns of Morton Feldman.