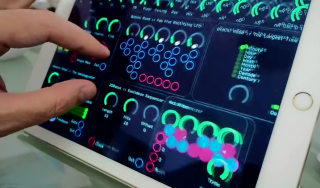 The developers of Audulus – a multi-platform software modular synthesizer – shared this sneak preview of an update that’s coming out later this month.

The update includes hundreds of new modules, including some never-before-seen sequencers and effects. The new Audulus module library is also designed to be much easier to understand; inputs and outputs have been standardized to work well with modulation and audio outputs, so there’s no more guesswork about what type of signal goes where.

Audulus also now comes with a growing library of presets, as well as a preset module that allows you to save your own favorite settings. You’ll now be able to pull up a patch and start playing without having to know anything about modular synthesis.

The new module library also includes several new effects for guitar – the most exciting being the Icebox Audio Freezer effect, which gives and enveloped control over infinitely sustaining delay repeats.

Along with the new modules are coming a string of new tutorial videos are in the works that are designed to get you up to speed with Audulus in less than an hour.

The Audulus iOS user interface has also been totally updated to make searching for and creating modules faster. You can now also add your own modules in the library with just a push of a button.

Finally, hidden beneath all these new additions is a powerful new synthesis engine that has been redesigned to run analog-modelling patches more efficiently, so now you can build larger patches than ever before.

Audulus is available for iOS, Linux, Mac & Windows. The update is expected to be available in mid Sept 2016 as a free upgrade for existing Audulus users.