The British Library shared this recording of what they say is the first ever recording of computer-generated music. 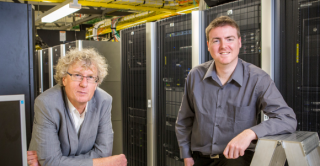 In a post at the Library blog, they discuss the origin of the recording and some of the challenges that researchers Jack Copeland and Jason Long, right, faced in restoring the audio.

In 1951, a BBC outside broadcast unit in Manchester used a portable acetate disc cutter to capture three melodies played by a primeval computer. This gigantic computer filled much of the ground floor of Alan Turing’s Computing Machine Laboratory.

Today, all that remains of the recording session is a 12-inch single-sided acetate disc, cut by the BBC’s technician while the computer played. The computer itself was scrapped long ago, so the archived recording is our only window on that historic soundscape.

The recording was made at Alan Turing’s Computing Machine Laboratory in Manchester. In the late 40’s, Turing documented how to use the computer to generated tones. His interest, though, appears to be mainly in using the tones to communicate what was going on in the computer – for example to signal when a job completed.

Programmer Christopher Strachey, though, explored the computer’s musical capabilities – creating what reportedly was ‘at the time the longest computer program ever to be attempted.”

The recording includes renditions of the National Anthem, Baa Baa Black Sheep and Glenn Miller’s In the Mood.

7 thoughts on “The First Recording Of Computer-Generated Music”