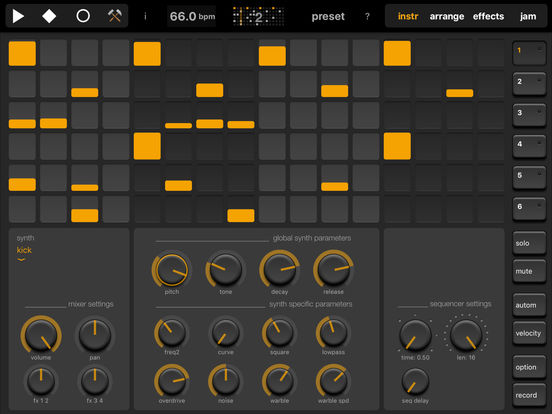 The new engine engine does the standard pitch, forward/backward manipulations, but it also has a wicket looper function, that is capable of producing sounds similar to a grain sampler, which cannot be produced by standard samplers.

Users can switch samples among different patterns, and there are many parameters again to allow the user to manipulate the sample/loop in an elastic way.

For the iPad version there is also new Edit View, where users can edit velocity and automation records in a more detailed and easy way.

Pricing and Availability. The Elastic Drums v 1.9 update is free, and users can use the sampler with the included samples to try it out and get an idea how it works. To import or record your own audio samples, the Sample Import option is available as an in-app purchase ($4.99 US). Elastic Drums developers added that this app and their fluXpad are having a special Halloween sale today ($7.99, regularly $9.99; and $5.99, rebularly $7.99).