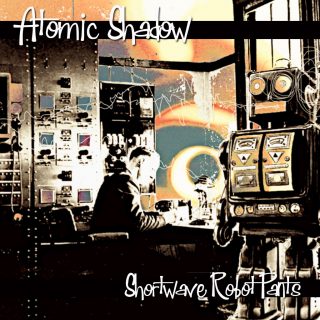 One of the most interesting electronic music albums to come across our desks in the last year is Atomic Shadow’s Shortwave Robot Pants.

Atomic Shadow (Rod Mitchell) has described himself as a ‘mid-century electronic’ artist, and that seems to be a good characterization of his style.

His work seems to come from a parallel universe, where the ‘sonic tonalities’ of things like the Bebe and Louis Barron soundtrack to Forbidden Planet, or some of the more ambient soundscapes of Blade Runner, are the inspiration for new experiments with sound.

Mitchell has an ear for creating sounds that rarely betray their origin, and he arranges them to create music that resists being pidgeonholed. While many of the tracks tend towards soundscape or dark ambient territory, other tracks pair abstract sounds with more recognizable elements. For example, Last Light From A Distant Sun, combines Kelly Ricks’ bluesy trumpet with electronic burblings, creating a sort of ‘Krell jazz’.

The album is not for the meek. It’s music that could clear a dance floor or send home guests that have overstayed their welcome.

But for adventurous listeners, Shortwave Robot Pants is a reminder that there’s an entire universe of electronic sounds and music, still waiting to be explored.

You can preview Shortwave Radio Pants below: