Has the Microsoft Surface Pro leapfrogged Apple’s Macbooks as a platform for music apps?

That’s a question many are asking, as some Mac-based musicians have become frustrated by the combination of the stagnation of Intel’s CPU’s and Apple’s slowing schedule of computer updates.

Writer & musician Marc Weidenbaum (disquiet) shared his thoughts on the subject, and the above video:

This video is simply a glimpse at how the (Surface Pro 4) touch screen works for music, specifically in this case how the Aalto synth, from Madrona Labs, works. Aalto is running here from within Ableton Live.

The short version is that the screen is great for this sort of software, something with lots of virtual knobs and patch cords and buttons intended for touchpad/cursor use. Aalto is fine with a keyboard and trackpad, but it’s even better with the touch screen.

The main thing that happens once you start using a synth like Aalto with a touch screen is that things that aren’t touchable, such as the shape of an envelope, suggest themselves as touchable. Perhaps software will become more touchable as time proceeds, with some features only available on touch screens. As a friend said elsewhere, once some things are touchable, you want everything to be touchable. 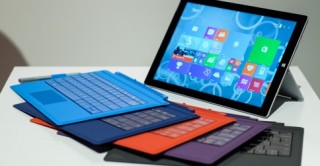 Weidenbaum’s comments highlight the quandary that many musicians are in.

iPad music apps are where much of the most interesting synth and interface design has been happening over the last few years. But, now that multi-touch interfaces have proven themselves, musicians want that same level of immediacy and usability everywhere.

But, devices like the Surface Pro 4 show that, while a touchscreen is nice, the user experience will be kludgy until apps get completely redesigned with multi-touch screens in mind. And, on the iOS side, even though the iPad Pro offers power and a mature multi-touch interface, few of the apps that musicians actually base their workflows around have been ported to the platform.

It looks like it will be years before we’ll have a mature, powerful multi-touch enabled platform for music. And it’s too early to know which approach, Apple’s or Microsoft’s, will get there first.

Do you think Microsoft’s Surface Pro 4 is leapfrogging Apple’s MacBook? Let us know what you think – and what you think of the state of multi-touch computing for music – in the comments.

83 thoughts on “Has The Microsoft Surface Pro Leapfrogged Macbooks For Music Software?”