Moogfest organizers have made the first round of announcements for Moogfest 2017 in Durham, NC.

In 2016, Moogfest welcomed 40,000 attendees from 22 countries and 41 states (with 5.6 million livestream viewers), and did not shy away from dealing with controversy, like North Carolina’a HB2. The 2017 event will build on this, with programs that focus on musicians’ & makers’ roles in creating a better future.

“We think a little differently about what it means to be a festival,” says Moogfest Creative Director Emmy Parker. “Rather than growing year after year, we’re more concerned with how we can make a bigger impact with everything we do. Our community of makers has the power to design a beautifully innovative and equitable future. It’s our responsibility to provide a platform that encourages them to create this change.”

By day, the festival will explore Future Thought, a series of presentations, conversations, workshops and installations. By night, Moogfest will explore Future Sound, with performances by early pioneers in electronic music, alongside pop and avant garde experimentalists.

Following up with her Re-Wired series where she collaborates with electronic production and design students at Berklee College of Music, Nona Hendryx will present a performance and demonstration of her wearable tech instruments.

Her career has spanned decades and put her at the forefront of funk, soul, R&B, pop, hard-rock, new-wave, and new-age music. From being a member of the iconic trio ‘Labelle’ famous for their hit ‘Lady Marmalade’ to an 8 studio-album solo career to translating her passion for tech into a full-on 2nd career as a Visual Artist — Hendryx is a constantly evolving creator and visionary.

Grammy Award Nominated Kyle Dixon and Michael Stein of S U R V I V E, Austin’s retro-leaning synth act, will present music from their original nostalgia-flickering score to Netflix’s ‘acclaimed series Stranger Things ahead of the slated release of the popular show’s second season in 2017.

Wolf Eyes, co-presented by Trip Metal Fest, will host a workshop and conversation. Through their own use of technology with sonic protest, Detroit’s notorious noise band recently allowed fans to download their back catalogue from their Bandcamp, for a donation going towards various charities representing reproductive rights, LGBT causes and pro-immigrant foundations.

Durationals – Moogfest continues its durational sound installation series. Pure sonic immersion will take place over three days of Moogfest. Each performance will unfold over a span of three to four hours, where anything can happen. This year’s highlights feature artists who will host the audience in intimate spaces while creating never-before-seen personalized sensory experiences.

Known for her documentarian approach, soundscape designer, poet, and activist Moor Mother aka Camae Ayewa will host a durational plus time travel sound workshop with Portland based Synth Library, who offer modular synthesizer workshops to female and non-binary music enthusiasts.

A collaboration between cavernous sound designer/producer The Haxan Cloak aka Bobby Krlic and Yeah Yeah Yeahs guitarist Nick Zinner who makes his return to Moogfest for his second play.

This will mark Laraaji’s debut 8-hour sleep concert, in which he describes that ‘participants will imagine their self in the present time of a sincere desire, dream vision being fulfilled. Gentle ambient celestial sounds and tones unfold over an eight hour period with zither, and various instruments supporting rest and trance, in an extended yoga SAVASANA. Participants awake with a 15 minute guided laughter meditation.'” 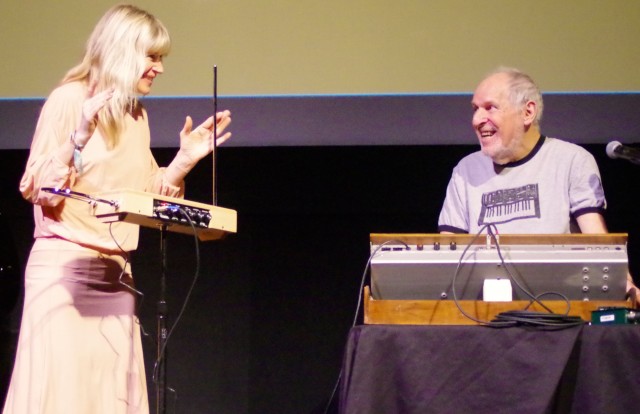 Organizers shared these summaries of the themes/tracks for the 2017 event:

Festival Pass – $249 – General Admission for the duration of the event. Access to all festival venues for performances and conference programming: conversations, workshops, and installations. Workshops are available via RSVP. VIP Festival Pass holders will receive first priority on a limited basis.

VIP Festival Pass – $499 – VIP access for the duration of the event. Priority access to all festival venues for performances and conference programming: conversations, workshops, and installations. Access to exclusive VIP viewing areas and events and gift bag. Complimentary food and drink in select locations. Workshops are available via RSVP. VIP Festival Pass holders will receive first priority on a limited basis.”

Engineer Festival Pass (limited quantity) – $1500 – This two-day synth-building workshop, led by Moog engineers, invites a select group of enthusiasts to build their very own unreleased Moog analog synthesizer and sequencer. The hands-on workshop is conducted in two, three-hour sessions within the Pop-up Moog production facility. No experience necessary, but basic soldering knowledge is recommended. Participants in the Engineering workshop also have VIP access for the duration of the event. Priority access to all festival venues for performances and conference programming: conversations, workshops, and installations. Access to exclusive VIP viewing areas and events and gift bag. Complimentary food and drink in select locations. Workshops are available via RSVP. Engineer Festival Pass holders will receive first priority on a limited basis. Pre-Sale Engineer Festival Passes available for a limited time, while supplies last.

See the Moogfest site for details.