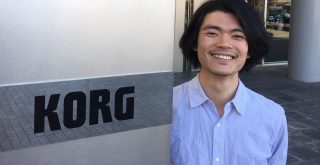 Synth Guru Tatsuya Takahashi announced today that he is leaving his existing role at Korg.

In his role as Chief Engineer of Analog Synthesizers at Korg, Takahashi has helped create a wide range of popular synths and electronic music gear, including the Monotrons, Volcas, Korg’s ARP and MS-20 reissues, the Minilogue and more.

Takahashi is moving on to a new role within Korg, to ‘explore new areas where sound and technology can have positive social implications.’

Here’s the full text of his message:

THANK YOU!!!
It’s been a good ten years at Korg!

A few years after starting at the office, Tada and I, over a cigarette break, started shooting ideas around for a battery powered pocket analog synth. The monotron was the humble beginnings of what became a mission to make synthesizers fun, exciting and accessible again. To give synthesizers back to the people. To make synthesizers less snobby. To open up creative opportunities. To get people interested in electronic sound and see some kind of light in creating their own sound using technology amidst a world that is inundated with it.

After a blur of 21 products we released over seven years, I look at the world of synthesizers and it’s a pretty cool place. I see kids getting their first taste of synths with the volcas. I meet people who have their dormant synth passion rekindled by the minilogue. And it’s not just Korg. The whole industry has set out to achieve this common goal.

The name volca comes from the German word Volk: “the people” or “crowd”. Like Volkswagen “the people’s car”, the volcas are “the people’s synth”. I have fond memories of meeting Mike Banks and being told how the volcas reached poverty-stricken youths in Detroit. That manufacturers have to take responsibility for the social implications of putting out gear.

On the 17th of February I will be leaving my full time position at Korg and will sidestep to advisor. I will also be moving out of Tokyo to Cologne to explore new areas where sound and technology can have positive social implications. I won’t be going to any of the competition, but rather will be shifting direction of my main line of work while at the same time guiding the now super team at Korg venture into the future.

I am hugely indebted to everyone in engineering (my super duper team will keep designing the best of the best), production (love you all in Vietnam we did this together!), sales (job well done), marketing (fun times making those movies), distribution / dealers (essential work the world over), media (you guys got the word out) and most of all the musicians out there who are creating music with our synths – without you our work is meaningless.

it’s been a ton of fun. more to come.