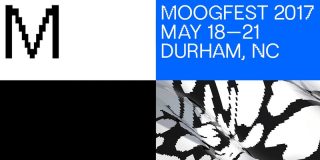 This morning Moogfest made their biggest announcement to date about the performers and presenters participating in their annual festival, its 11th iteration honoring the spirit of inventor Bob Moog, which is coming up May 18 – 21, in Durham, North Carolina. 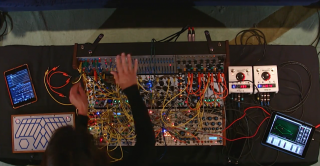 Intimate and celestial. Performances from Sudan Archives, Ry X, Kaitlyn Aurelia Smith, Mary Lattimore, Marisa Anderson, and Colleen join a lineup that includes Visible Cloaks, and Syrinx with a live orchestral ensemble from Durham’s Mallarmé Chamber Players that has been assembled specifically for this Moogfest presentation.

Black Quantum Futurism. Philadelphia’s multidisciplinary artist Moor Mother, along with The Afrofuturist Affair and Metropolarity, lead a program on Moogfest 2017 theme Black Quantum Futurism with an array of workshops, readings, and conversations. Black Quantum Futurism uses a Sci-Fi lens to examine issues of representation, consciousness, and an understanding of self. Afro-Nuyorican Princess Nokia will host a workshop while Paris Strother of R&B sensation KING will share some of her expertise, insights, and approaches in a class on analog synthesis. 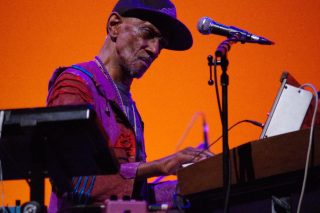 Tributes. Moogfest honors some of the innovative musicians who passed away in 2016, including Jean-Jacques Perrey, Pauline Oliveros, Bernie Worrell (pictured, right, at Moogfest 2014), and Keith Emerson. Gotye will present a tribute to the French electronic music pioneer Perrey, with an intimate in-the-round performance and Ondeline Orchestra musical workshop. The Center for Deep Listening will present daily workshops in tribute to Oliveros (who, prior to her sudden passing, had been scheduled to appear at this year’s Moogfest). Peanut Butter Wolf will perform an open and free-to-the public DJ set, with a special section dedicated to late synth pioneers including Bernie Worrell and Keith Emerson.

Experimental film and live scores. This program will  showcase perspectives from “an array of multi-talented artists.” Kyle Dixon & Michael Stein of S U R V I V E will present a live score from the Netflix phenomenon “Stranger Things.” Dave Harrington, acclaimed minimalist composer and one half of the duo Darkside, will world-premiere his live score to the iconic 1920s silent occult film Haxan. Neo-soul futurist Suzi Analogue and Harlem-based beatmaker VHVL will live score their self-directed horror film No Moon No Man. Flatsitter will animate Moogfest 2017 with his virtual reality bus, transporting audiences to the digital afterlife via the fascinating story of spiritualists in Lily Dale, New York. Using modular synthesizers and digitized 16mm film, Jon Gibson and his new ensemble will live score Visitations to his cinematic images of the 1960s Californian desert, guiding audiences on a ritualistic road trip. Both Suzi Analogue and Jon Gibson will also lead their own workshops. 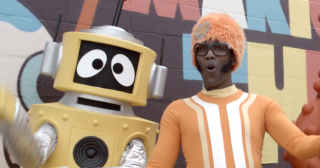 Music for children and experimental adults. “Surreal” comedian McQueen Adams, sonic manipulator DJ Nanny Cantaloupe, and DJ Lance Rock (of Yo Gabba Gabba!, pictured, right) will be among the acts open to the public as part of an entire day of free music programming that celebrates electronic music for kids of all ages. Closing the stage and transitioning audiences from day to night, Michael Winslow of Police Academy fame presents Noise Activity.

Prelude to Sleep. “Cosmic listening parties” combine playback of ambient recordings with projected visuals for audiences to wind down at the end of each night. Experimental film Maya Deren: Prelude to Generating a Dream Palette, with a score by pioneering composer Laurie Spiegel, set to late husband Peter Schmideg’s images and animations, will screen nightly as part of this special series. Other contributors include Gotye’s restored track of Jean Jacques Perrey’s Prélude au Sommeil, while Driftless Recordings and RVNG Intl both curate tracks from their catalogue of ambient artists and compilations.

Additional information, including complete program lineup, and explanations of different levels of festival tickets (including one which includes the hands-on Engineer synth-building workshop), are all on the Moogfest website.