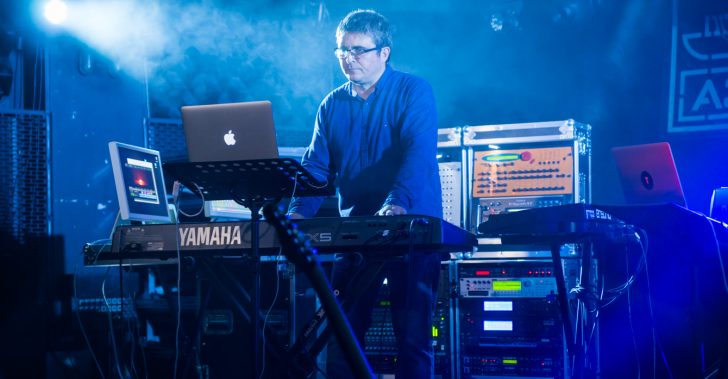 In this interview, one in a series following up on the festival, Debrecen-based composer László Kovács (Pergamoon) discusses his inspiration for getting into electronic music, performing classic Tangerine Dream tracks and more. 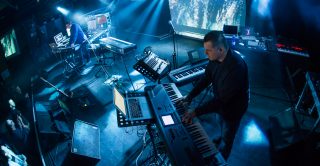 Synthtopia: László, what can you tell us about your band and your music?

László Kovács: Pergamoon is an electronic music group, founded some years ago. The members of the band are myself (band leader, synthesizers), Zsolt Vidovenyecz (synthesizers) and Tibor Réti (guitar).

The roots of the band dates back to much earlier though – it was known as Force Majeure before. Our first CD was released in 1999, titled as Total Eclipse, and we performed at several spectacular laser concerts between 1999 and 2002.

Pergamoon’s compositions move within a very wide range, from the melodic electronic music to the psychedelic ambient themes. The main direction though is the Berlin school, hence the name of the band. Our goal is to continue the 80s’ classical electronic music direction.

Synthtopia: When did you first get interested in electronic music?

László Kovács: My very first electronic music experience was in the mid-70s, when I heard the music of Delta, a scientific TV show: Tom Dissevelt & Kid Baltan – Song of the Second Moon (1957). Then Jean Michel Jarre’s Oxygene (1976) was released, which also affected me greatly.

But the main breakthrough for me was when I got my first Tangerine Dream album, Stratosfear (1976). I also must mention the names of Isao Tomita and Jonn Serrie. Their music also had a huge impact on me.

For me, electronic music is such a 3D dimension space, in which the dimensions of melodies and rhythms are made limitless by the tones’ dimension. Actually, it’s not even the musical compositions, but rather the novelty and diversity of the tones that made me play electronic music.

Synthtopia: What can you tell us about your performance at the Chip Festival, and what people  should expect from one of your live performances?

This project is a tribute to the memory of Edgar Froese, who passed away 2 years ago. The goal was to reproduce the music in the best possible form with nowadays’ tools.

For me, Tangerine Dream’s geniuses are like Mozart or Beethoven. I consider the remakes the same thing as when a symphonic band performs a classical piece. Although in this case, there was no available score, making my work harder.

The greatest challenge was reproducing the tones, that I did by myself. I played each phrase by listening. I think that those who eventually came and heard our concert, took part in a great time traveling, back to the 80’s….

Synthtopia: The event was dedicated to the memory of Edgar Froese. How have you been inspired by Froese and his work, and how has it shaped your own music?

László Kovács: The music of Tangerine Dream, and especially of Edgar Froese, is a great impact on my musical world. The structured way of the music, the solutions that are built up layer by layer, captured me even in my childhood.

The very first piece that i discovered before Tangerine Dream was Ravel’s Bolero. Then, as I got to know Tangerine Dream’s CDs, I released that it is the type of music that meets my taste.

In 1982, when I was 17, I went to Tangerine Dream’s Logos concert in Budapest. I came out from that concert as a changed person. That was when I decided to make electronic music. The musical diversity that was delivered under Edgar Froese’s lead is amazingly impressing for me, and it was renewed album by album.

The most important thing I learnt from Edgar Froese is the daring to experiment, and to let our fantasy fly; the most important factor is our imagination, the technical solutions are just the tools to make things happen.

Synthtopia: Where can people find out more about you and your music?

László Kovács: This year we are going to release our Berlin school album, Pleiades. We will also make a CD and a DVD from our 2001 laser concert material, titled as Music of Lights.

We are also working on an ambient style album, too. According to our plans, the Chip Festival 2017 material will also be released in a CD and DVD, but for that we’re still looking for a publisher.

After the CD releases we’d like to do concerts, where we’ll perform our own compositions alongside the Tangerine Dream projects.

This video features highlights of the band’s Chip Festival tribute to Edgar Froese and Tangerine Dream:

This next video is a preview of the Music of Light video, and features their own composition:

Special thanks to Simon Iddol for coordinating this interview and photoPBaranyi.hu for the performance photos.