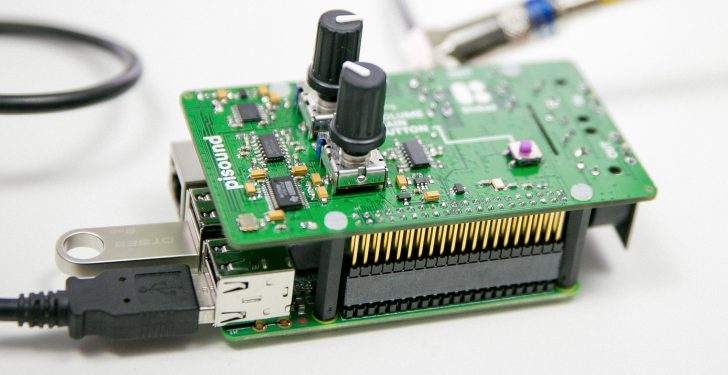 The Raspberry Pi is an inexpensive (around US $40) barebones computer. Its low cost and tiny size make new types of computer projects feasible, and the pisound is designed to expand its reach into audio applications.

pisound is an ultra-low latency high-quality soundcard and MIDI interface, designed specifically for the Raspberry Pi. It is equipped with stereo input and output, with Gain and Volume controls, classic MIDI In and Out ports with activity LEDs, a user-customizable button and additional software that will turn the Raspberry Pi into a complete audio workstation.

pisound is compatible with virtually all Linux distributions and software and can be used in any audio-related project. Using pisound with the Raspberry Pi, you can make your own music instrument, audio effect, portable recording studio, Internet radio station or network enabled audio player.

The main feature that lets the pisound integrate with the Raspberry Pi in a powerful way, is its user-configurable button. By default, using the button you can open Pure Data patches straight from a USB thumb drive, close them, shut down the Raspberry Pi and even launch a “pisound” Wi-Fi hotspot, so that you can connect via SSH, VNC or send MIDI/OSC messages directly to your Raspberry Pi using smartphone or tablet.

pisound production is being funded via an Indiegogo crowdfunding campaign, launched on ‘pi day’. The project is already close to meeting its funding goal. The interface is available to project backers from €79/$84/£68.