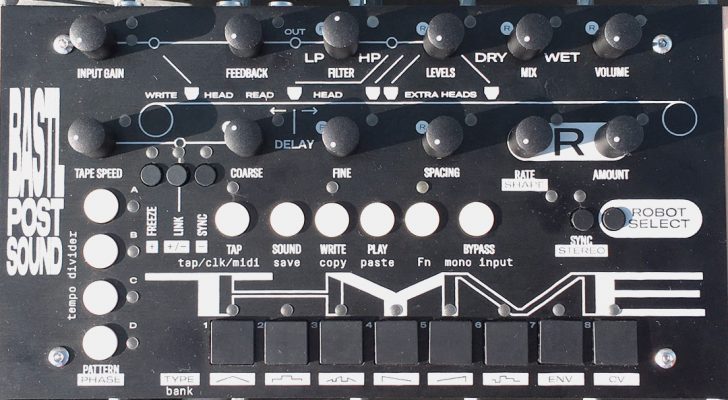 The Thyme is described as ‘a sequenceable robot operated digital tape machine’.

It’s designed to let you expore time-based effects. Each of the 9 different parameters (Tape Speed, Delay Coarse & Fine, Feedback, Filter, extra heads Spacing and Levels, Dry Wet Mix and Volume) has a dedicated and very flexible modulation source – called the Robot – which can be phased out differently for left and right channel to create ‘psychedelic new sound effects’.

The Robot can either be an LFO with many different waveshapes, external CV source or an envelope follower, to enable effects reacting to dynamics.

Bastl says that the Thyme is ready for production and that pricing and availability will be announced in May 2017. 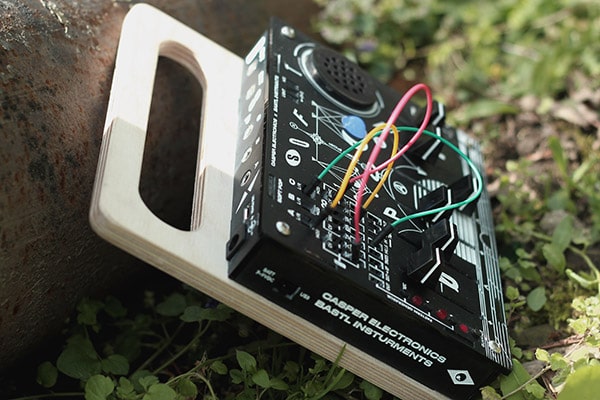 softPop is a semi-modular light and sound synthesizer, capable of a wide variety of sounds: from random dripping water pops to heavy subtractive basslines.

Its fully analog core consists of a heavily feedbacked system of dual triangle-core oscillator, state variable filter and sample and hold. It is played through an interface of 6 faders.

There is a secret chamber in the back for hacking & modding.

The softPop is expected to be available in a few weeks, somewhere below 300 eur.

Kong is a dual drumpad interface for Eurorack modular synthesizers that can amplify a drumpad signal and convert it to trigger and velocity CV signals.

The Gain knob helps to amplify signal from any drumpad and serves as a sensitivity setting for the velocity. The architecture is fully analog and the Velocity CV signal is generated by sample and hold circuit with extremely low drift. Bastl says that it’s perfect for controlling crazy patches by hitting a bunch of drumpads.

Kong is available now for preorder from noise.kitchen for 109 eur without tax. Preorders will ship in June.

The Dude is a portable, battery-operated 5-channel audio mixer, with mini jack inputs and output, designed to work with portable devices like the Korg Volca series.

Each channel has a dedicated mute button and up to +20dB gain to boost weak signals or saturate line level signals. It is a monophonic mixer, but can drive your headphones, so it’s good for small portable rigs or submixes on stage.

Each channel also has enough gain that it can be turned into tone generator, by feeding the output back to an input thru a passive eq and other simple circuits.

The Dude runs on four AA batteries (or external power supply) and it is almost as small as its battery pack.

The first batch of the Dude is available now from noise.kitchen for 75 eur excluding tax.

In addition to the introductions, Bastl has also announced that the microGranny – a granular sampler with built in microphone that saves samples on a microSD card – is now available as a DIY kit.

The microGranny kit is available now from for 130 eur excl. tax.

4 thoughts on “Bastl Instruments At Superbooth 17”